Posted on Saturday 7 September 2019 by Gareth Prior

When Nottingham Express Transit opened in 2004 some of the trams in the fleet started off not in fleet livery but instead carried full vinyl wrap adverts, one of which was 209 and it is that tram which is featured in today’s archive photo.

From the start of NET 209 was in this full vinyl wrap ad for Westbury Homes. Only the doors were clear of vinyls with extensive use of the contravision although the ends of the tram were kept clear and kept the standard fleet livery – the first real time in the UK that this type of design had been seen on a second generation tramway. The tram would retain this advert into 2006 before it reverted to standard fleet livery.

We see the tram here pausing at Wilkinson Street on 10th March 2004 heading to Station Street. 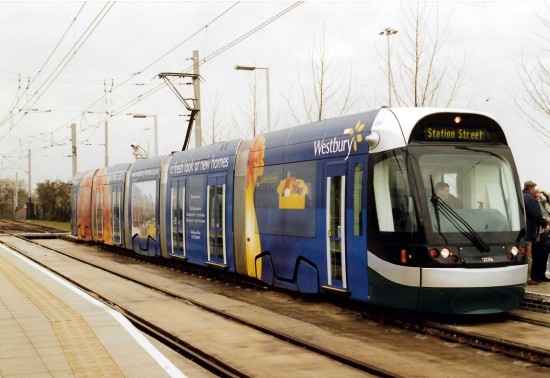