In Pictures: B fleet Balloon runs in service

Posted on Thursday 5 September 2019 by Gareth Prior

Ever since the upgraded Blackpool Tramway started in operation one major topic of conversation has been the use of the “B fleet” Balloons which were modified with porches to allow them to stop at the light rail platforms. Since 2012 their use has been sporadic in this way and over the past couple of years the only use for these trams has been with them on loan to heritage tram tours – but now the 2019 illuminations has begun and it looks as if there may be an increase in their use on specials.

The first weeknight of the illuminations, Monday 2nd September, saw Balloon 711 allocated to specials with the tram running several trips during the evening including as far north as Little Bispham and south to Starr Gate (where the crew took a break). And its use has been repeated most nights since although with a different pattern and length of use. This was a bona fide use of the tram as B fleet car with it stopping at the platforms and normal fares applicable – it may not be the full use expected when the trams were modified but at least its something!

Its not clear yet how regular this will but there has been driver training on the trams recently so it may be that it will at least be semi-regular throughout the illumination season. How the passengers of the tramway cope with the B fleeters being used for this purpose also remains to be seen with even more confusion likely when they are also used on heritage or illumination tours within a few days of each other! 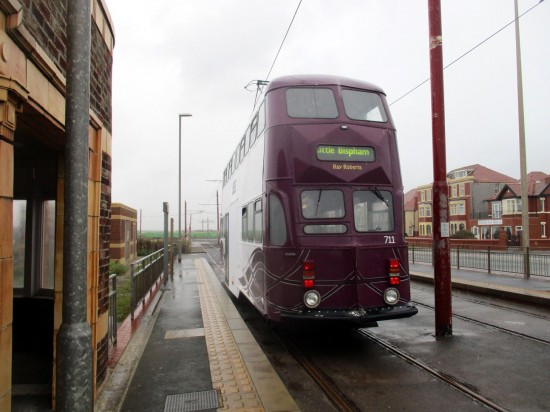 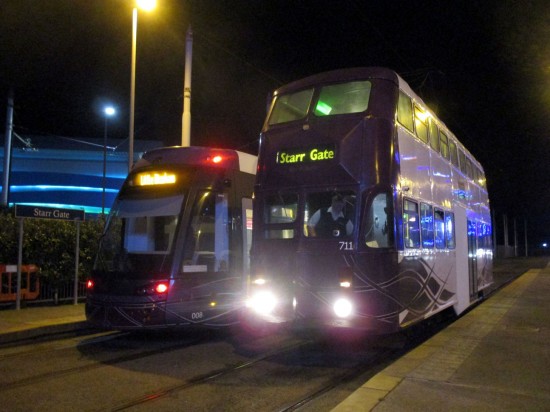 711 also made its way south to Starr Gate and is seen here alongside Flexity2 008 at the terminus. (Both Photographs by Rob Bray, 2nd September 2019)