Around the World in Trams: Bratislava 7741

We now move to the Slovakian capital of Bratislava for a couple of week’s as we take a look at some of the trams that operate on the tramway there.

Public transport in the city is run by Dopravni podnik Bratislava and includes not only trams but also trolleybuses and buses. The tramway is a metre gauge system with around 200 trams in service operating from two depots. Probably the most notable feature of the system is a 792m long tunnel which runs under the castle and has been dedicated to tram use since 1983.

In this photo we see Tatra T3 7741 (along with an unidentified classmate) operating on route 9 in Sturova. Both trams are in the revised all red livery and feature extensive advertising as well (the traditional livery was red and cream). The majority of the tram fleet in Bratislava is made of Tatras. These trams were captured on camera on 16th May 2012. 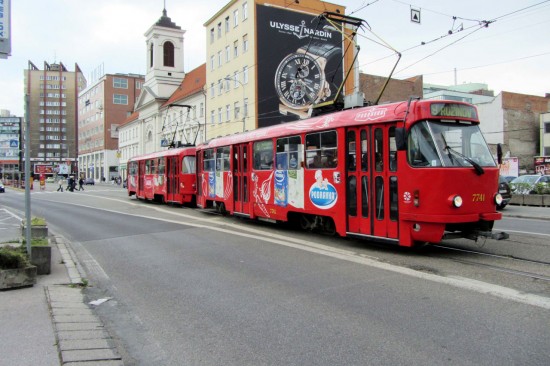