It took four days but finally a full service has resumed on the Tyne and Wear Metro following the conclusion of repairs to the overhead at Chillingham Road. Trains started running between St James and Wallsend – the last section without a service – from around 1600 on Friday 3rd May.

The disruption had started on Monday 29th April when a 600 metre section of overhead at Monkseaton and 500 metres at Chillingham Road came down. Initial concentration on repairs was at Monkseaton as that would enable the best service to run with trains able to run this section from Tuesday 30th April but the repairs at Chillingham Road took longer meaning it wasn’t for a further three days that trains would run between St James and Wallsend again. In total 1.1km of overhead had to be replaced this week by Nexus’ repair teams.

Nexus have now confirmed that the wires were brought down by a train which developed a fault with its pantograph and snagged the overhead wires in both locations. 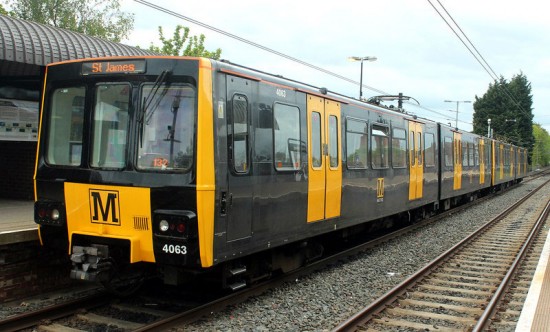 4063 stands at Wallsend. The destination may still say St James but this is as far as this service would go with it then departing empty and using the crossover in the distance to return to platform 2 and back around the Coast. (Photograph by Trevor Hall, 3rd May 2019)