Posted on Thursday 28 February 2019 by Gareth Prior

One of three trams at the Seaton Tramway which started off life as a “full size” tram (in this case 3’6” gauge) is no. 16. A former Bournemouth Corporation vehicle this is the tram that features in today’s Picture in the Time.

Originally built in 1921 by Brush 106 was an open top tram which remained in service until the end of the tramway in Bournemouth in 1936. Although a number of trams from the same batch were sold on for further use in Llandudno 106 was not one of these but it was not scrapped and instead sold on for domestic use. Rescued in 1974 the remains of the tram were presented to the Seaton Tramway who set upon converting it into a single deck saloon. This work was completed in 1992 and the tram has remained in use ever since; often being the first choice tram for Driver Experiences whilst also being popular in this colder winter months.

Speaking of Driver Experience that is exactly what 16 was in use for in this 2003 view at Colyton with the tram at the northern extremity of the Seaton Tramway. 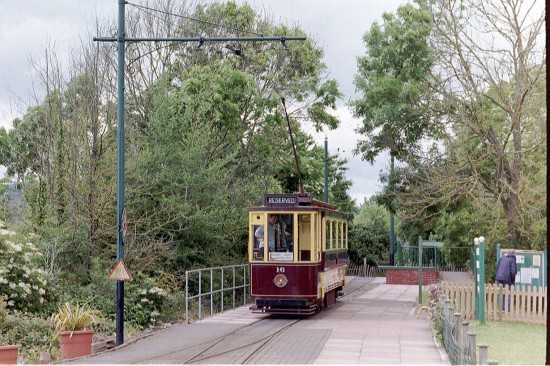