Posted on Tuesday 21 August 2018 by Gareth Prior

We continue our look at some early 1990s images from Blackpool today as we see Ex-Towing Railcoach 678 along with a couple of the ubiquitous Balloon Cars.

678 is actually at the back of a queue of three trams, at a time when there was no problem of trams pulling up right behind the one in front of the mainline. 678 is carrying a plain, simple but effective all over advert for Auto Trader which by the time this image was captured in August 1992 was in the latter stages of its life (it would be removed later the same year). The Ex-Towing Railcoach – now part of the Fleetwood Heritage Leisure Trust collection at Wyre Dock – was withdrawn from service in October 2006.

Also included in this image are two unidienfied Balloon Cars; one of which is in the 1980s Green and Cream with the other in the more up-to-date fleet livery. 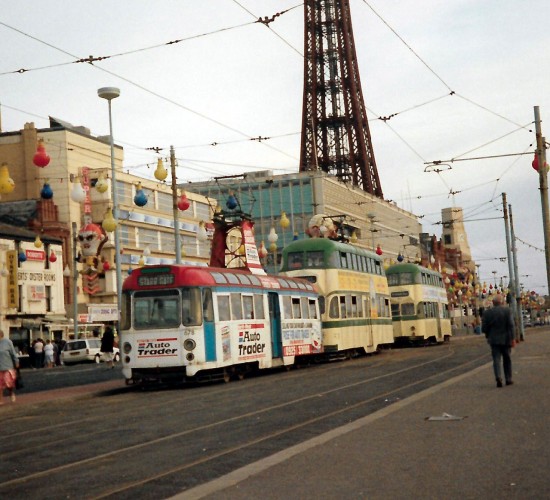