Inspired by our recent guide to enthusiasts visiting Rome this is the first in a new triology of articles based on the visits of an American based British traction enthusiast – Edward M Koehler. Starting off with the Manx Electric Railway these are Edward’s observations of the line plus some photographic locations he discovered during this visit to help any enthusiasts visiting for the first time, something which may well happen soon with the 125th anniversary events at the start of September.

This is not meant to be a complete guide to the line and some of the comments may be obvious to some regular visitors to the island but these are the views of a first time visitor to the Manx Electric Railway. If you have any comments, or corrections, to the the below please leave a comment. The following is based on visits in 2009 and 2014, obviously things have changed in places since but this guide should give you an idea of what you can see on the line.

A little knowledge is dangerous; too much knowledge can get in the way!  Perusing the timetable of the Manx Electric Railway on a normal weekday I realised that the schedule involved the use of five sets of motors and trailer cars.  Four of these train sets originate at Derby Castle with the fifth making its way down from Ramsey.  As I wanted to get some roster type shots of the Manx Electric cars I thought it would be a perfect way to capture ten of them by just attending at the Derby Castle platform during a Monday morning.  So on 3rd August 2009 I left my hotel and headed for the north end of the Promenade.  The day dawned stormy with intermittent rain and a cold wind was coming off of the Irish Sea; lovely weather for a traction enthusiast.  But I persisted and not only did I capture the ten in service cars, but I had a chance to shoot an open motor car being used on a private way works movement and a tunnel motor shunting a trailer out of the depot.  As for roster shooting; I got wet, cold, and could proudly state that it was a good spot.  Remember that the motor cars lead the trailers out of Derby Castle depot so they run around the trailer at the throat of the station. 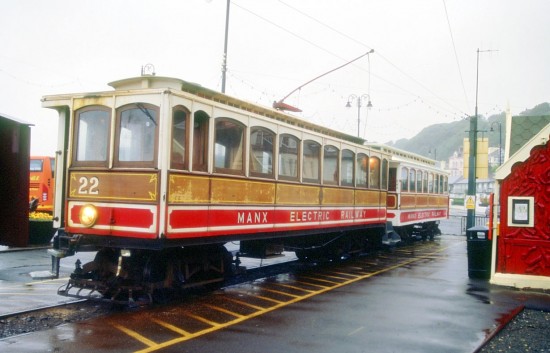 I should point out that this visit occurred during the Annual Historic Transport festival so some unusual rolling stock was out and about that day.  It was an ordinary Friday schedule being offered on 19th September 19 2014 when I returned to Derby Castle to repeat my roster shooting; this time in brilliant sunshine! 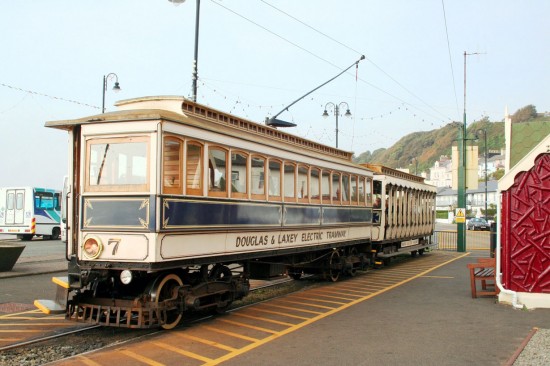 All in all, if you are looking to quickly secure some roster type shots of the Manx Electric Railway, a few hours in the morning at Derby Castle is worth your time.

If you are looking for an action photograph of the Manx Electric take a few moments to continue north from Derby Castle to Onchan Head.  Here the tramway is at the top of a rather steep grade and had to negotiate a tight radius curve.  By the way, the traction motor noise riding in the cars is magnificent!  But then we are not on the cars at this time.  The view from King Edward Drive is such that you can see the train as it depart Derby Castle and watch as it approaches the photograph site at the bend in the road.  Usually the roadway traffic is almost nonexistent. 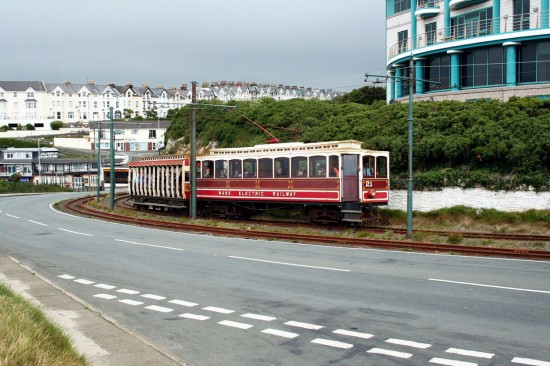 On 8th September 2009 is seen here at Onchan Head leaving Douglas behind.

Groudle doesn’t really have much to offer the visiting enthusiast tramway-wise, unless the Manx Electric Railway is operating a shuttle train to Groudle for the Groudle Glen Railway with unusual rolling stock.  Although I do note that the post box door at this station has Queen Victoria’s name on it.

Halfway or Baldromma Beg was the location of the first authorized terminal of the Isle of Man Tramways and Electric Power Company, Limited; it is also where the Manx Electric Railway first crosses the coast road.  There is an impressive array of signs and flashing lights to protect the motorists from the trams (or is it trams from the motorists?).  If you have the time and the schedule is right you might want to photograph a northbound car going across this level crossing.  It’s a bit tricky because of all the poles in the area but do-able. 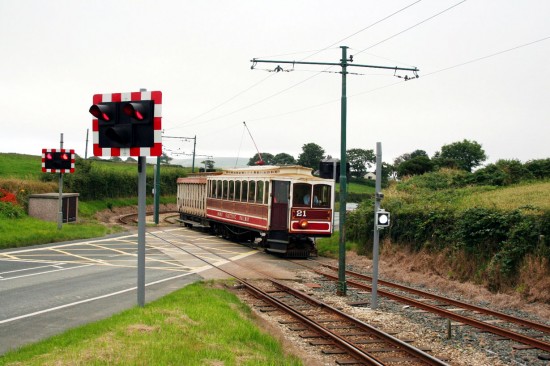 21 again demonstrates this location as it heads north crossing the A2 in Lothan Parish.

The next destination of this tour of the Manx Electric Railway is the village of Laxey.  During festivals on the railways there is usually something happening there be it an exhibit, a movement of unusual  equipment, or just the normal interchange of passengers with the Snaefell Mountain Railway.  If you are there before a Manx Electric train arrives you can usually get some decent roster shots of the Snaefell Mountain cars as they lay over on their sidings; and if you are patient an image of the Manx Electric Railway cars without passengers milling around is possible; but I would counsel you not to plan on shooting at the station instead walk out to the level crossing of the coast road near Ham and Egg Terrace. That said, if the sun is right there are good images to be had of northbound trains at the north end of the Laxey Viaduct from the south end of the station grounds by the church. 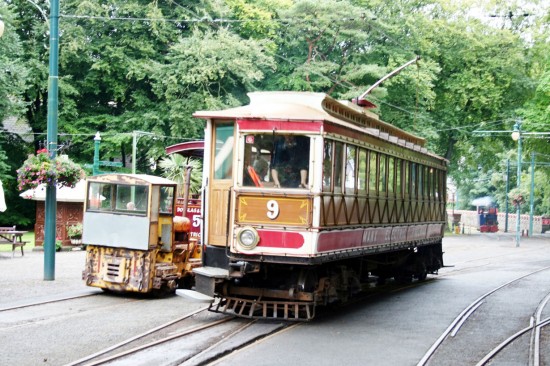 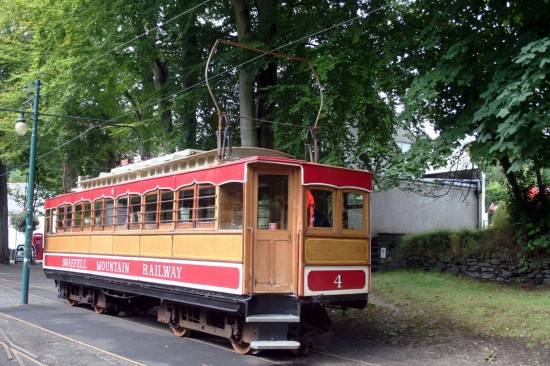 The Snaefell Mountain Railway terminus at Laxey with no. 4 in situ.

By walking out of the station area and crossing the coast road you have opened up a wider angle for your camera to capture, and one that is generally not as heavily populated as the station area.  I do not recommend shooting in this ‘throat’ area as there are limited clearances, particularly by the Mines Tavern (do go in and see their bar, it is worth it!).

If you stand north of the tracks on the level crossing you can look down the throat of Laxey station, at this point there are three tracks; the easternmost pair is the three foot gauge ones of the Manx Electric Railway, the westernmost track is the forty-two inch gauge of the Snaefell Mountain Railway.  Equipment of both of these railways can be captured at this location. 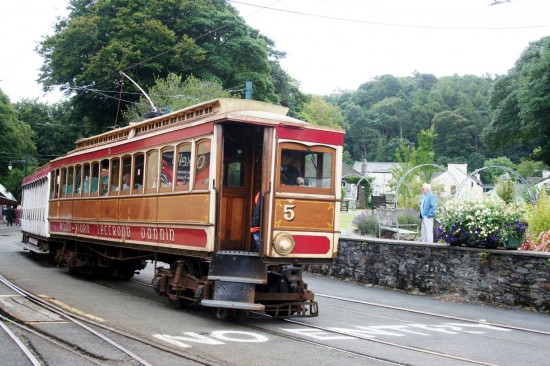 5 heads out of Laxey Station. 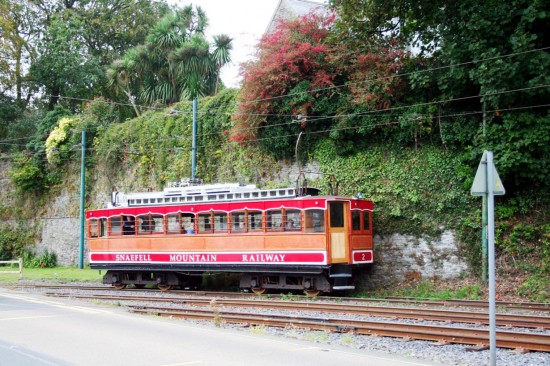 This is where the Snaefell Mountain Railway starts its ascent to the summit and leaves the Manx Electric Railway. This is no. 2. 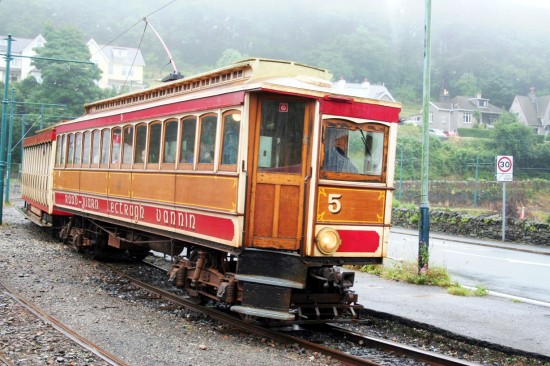 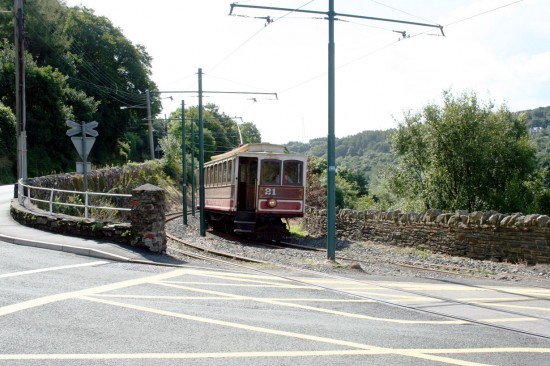 21 descends into Laxey with a southbound trip to Derby Castle.

There is an open area at Dhoon Quarry that is not bad for photography but if it is a normal weekday not a lot of trams come by.  If you are on a special movement on the Manx Electric Railway; many of these specials will pause at Dhoon Quarry for enthusiasts to capture their own images.  Personally after Laxey I would head to the terminal of the line at Ramsey.  Do note that the photographs shown and my notes about this location are from the period prior to its redevelopment.  Ramsey, which is the northern terminal of the line, is worth a visit to view the method used to move the trailer around to the other end of the train, plus it is a good opportunity to capture a roster shot or two of the train while it waits on time at the terminal.

The train arrives from Douglas and pauses at the entrance to the terminal area; passengers are detrained in the area.  With the passengers off of the train the motorcar pulls forward and then reverses until it is on the southbound track next to the trailer.  The conductor who is aboard the trailer then takes off the brake and gives it a push so it drifts down into the Ramsey station grounds; the conductor hopping back aboard to operate the hand brakes and stop the car.  The motorcar then reverses its pole and backs down onto the trailer car, the drawbar is inserted between the two vehicles and the train and crew then wait for their departure time. 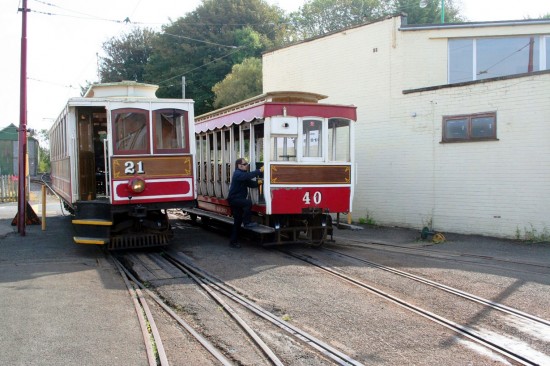 The situation as was at Ramsey at the time of these visits as 40 is pushed down to the stop passing its motor, 21. 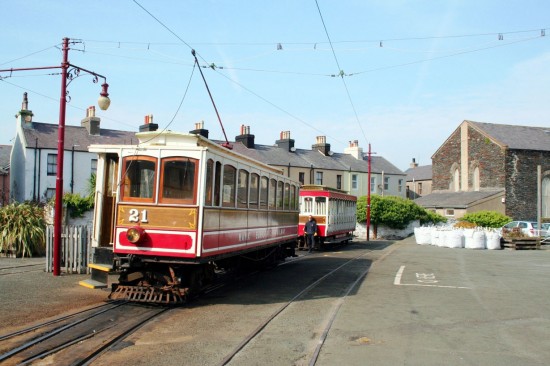 The run-round maneouvre is completed as 21 backs onto the trailer.

This pretty much finishes our tour of potential photographic sites along the Manx Electric Railway, but there is one more location near Ramsey that is worth a visit if you are there in the morning. That location is Walpole Drive in Ramsey where the tramway is located alongside the road.  In the morning the sun is just right for to capture an image of that morning departure from Ramsey. 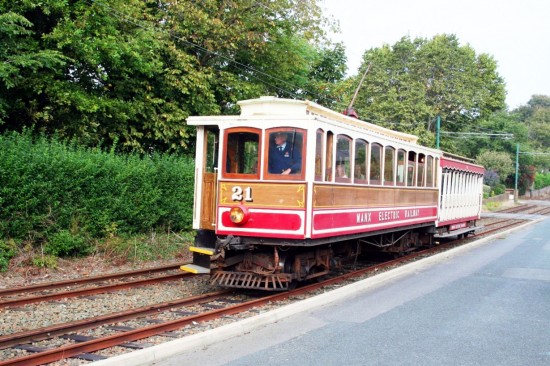 21 again demonstrates this location as it heads past Walpole Drive. (All Photographs by Edward M Koehler)

I confess that I have only visited the Isle of Man twice in my life so I have some serious doubts that I am worthy enough to put this material together.  I am fully confident that I have the ability to start the conversation about tramway photo guides and in that spirit I offer this material.

If you feel inspired by this article and would like to provide some of your favourite photographic locations of any tramway in the British Isles please email gareth@britishtramsonline.co.uk. We will have further instalments in this series from the Great Orme Tramway and Crich Tramway Village in the coming weeks. As always any comments or corrections please either leave a comment below or email.