Posted on Saturday 5 May 2018 by Gareth Prior

A scene which was an all too familiar sight for anyone who took notice on the Blackpool tram scene throughout the 1980s, 1990s and into the 21st century features in our archive photo series today – a broken down Centenary Car!

This photo was captured at Tower in August 1996 and shows Unimog 940 hauling Centenary 646 back to depot with an unknown fault. This Unimog was a familiar sight on the Blackpool Tramway for many years and was often used for rescues such as this as well as general maintenance across the tramway.

The advert being carried by 646 is for The World of Coronation Street (which used to be at the Sandcastle) and was in its second season having been applied 12 months earlier – the first time 646 lost fleet livery – and would remain on the tram until May 1997. 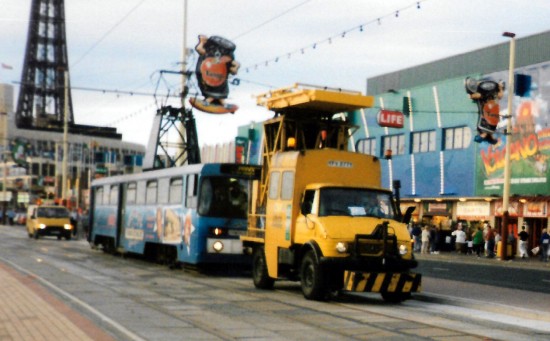