Posted on Thursday 9 November 2017 by Gareth Prior

It has been a couple of years since we last featured the restoration of Cambridge Street Tramways no. 7, a horse car built by The Starbuck Car & Wagon Co. in Birkenhead but in the intervening period a good degree of progress has been made in bringing back up to a recognisable tram at the Ipswich Transport Museum.

The tram was in fact a third hand purchase for Cambridge having previously operated in both Bath and Bradford before heading east to Cambridge. The tram is thought to date from 1880 when it was built as new for Bath but wasn’t delivered to Cambridge until around 1894 when it was the – not unsurprisingly – the seventh tram to run on the tramway which had also opened in 1880. It remained in service until the system was closed – without any electrification having been seriously considered – and was then sold at auction where it ended up as a workshop extension to a bungalow at Ely.

It was acquired by the Ipswich Transport Museum in 2003 but work did not start on the restoration of the tram until 2012 once the cosmetic work on electric car Ipswich 33 had been completed. When we last saw the tram on these pages progress had been made on the lower saloon where the roof was being repaired ready for recanvasing with the no. 2 bulkhead being constructed. The lower deck sides were also being readied for panelling and attention would then be turned towards the wheels and brake gear being refitted. At this stage no. 7 was starting to resemble a tram again although you would have been hard pressed to realise it was a double decker.

Fast forward to 2017 and there is no doubt that it is a double decker with stairs now in place, full lower deck panelling and undercoat on the body. Internally work continues on the seats whilst the tram now sits on the trucks – with the wheelsets having been produced by the Leeds Transport Historical Society. The work is being partly funded by the Heritage Lottery Fund and once complete the Cambridge Street Tramways 7 is sure to be a prized exhibit at the Ipswich Transport Museum! 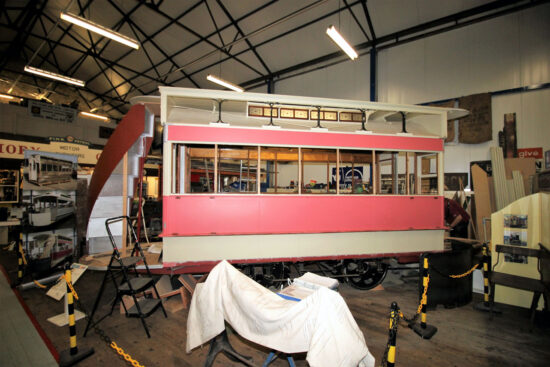 A side on view of 7 in the workshop under restoration showing the excellent progress which has been made recently. Note the photos to the left of the tram which show various different stages of the work. 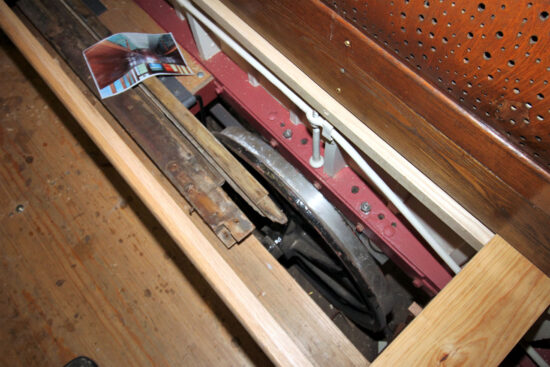 Looking through the lower saloon floor at one of the wheels on the truck. 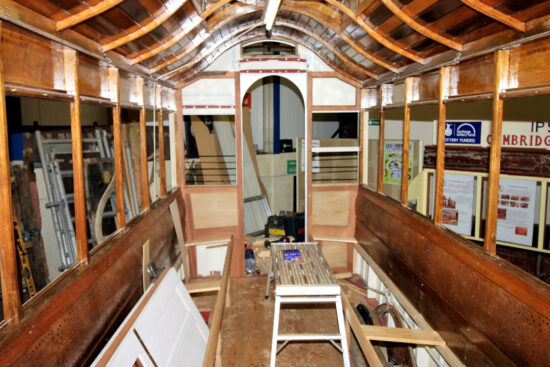 A view of the lower saloon where work is continuing on the seating. 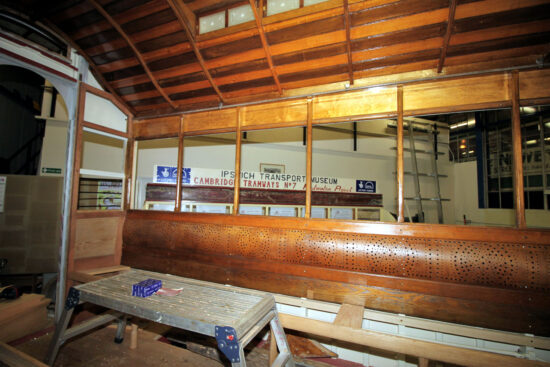 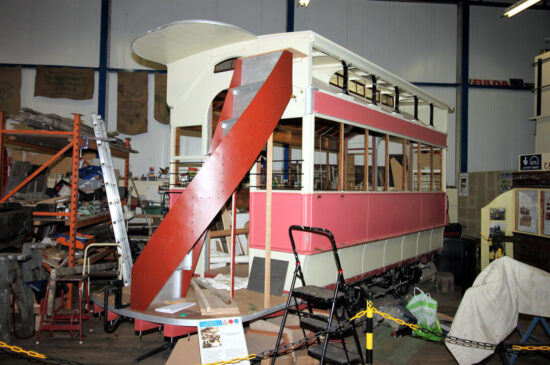 One last external look of no. 7 with the stairs to the top deck in evidence in this view. (All Photographs by Bryan Grint, 22nd August 2017)

1 Response to In Pictures: Cambridge Horse Car 7 under restoration