Posted on Saturday 19 August 2017 by Gareth Prior

In this edition of Picture in Time we are heading back to Sheffield for a look at one of the Duewag-Siemens built trams – 120, probably the one tram which has carried the most different liveries.

120 was built in 1994 in Dusseldorf, Germany and made the usual trip across mainland Europe to Nunnery Square Depot to arrive in time for the system staggered opening in 1994. Originally carrying the drab grey livery it received the original white Stagecoach livery before it received its first all over advert, and it is that livery which we feature in this instalment. The tram carried this advert for Meadowhall – not the only tram to advertise the shopping centre over the years – which was a two sided version with one side being pink based and the other was blue. Once the advertising contract was over the advert was removed in 2004 and it received the second Stagecoach white livery before its refresh saw it receive the newer red based Stagecoach livery. After another couple of years it was a new all over advert – this time for East Midlands Trains – and then this was replaced by the Sheffield Corporation inspired cream livery. All in all over the years 120 has carried seven different liveries.

In this first image we see the pink side of the advert at Sheffield Station on 6th June 2003. 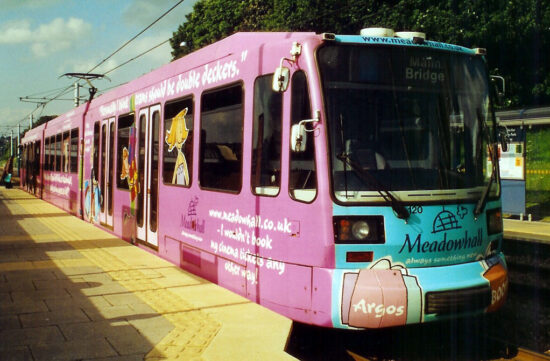 Same location, same date, same tram but the other side of the ad. On this day 120 was operating on the Blue service. 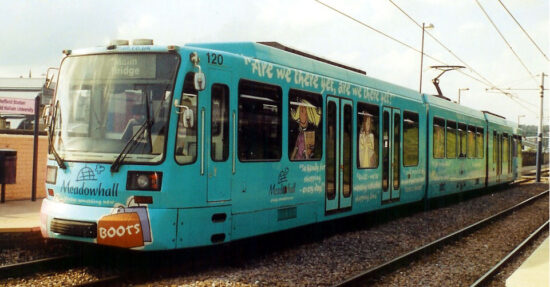