A Picture in Time with a difference today as we take a trip to North Wales but it isn’t the Great Orme Tramway which takes our attention but rather a miniature tram which used to run alongside the main railway line.

The tramway was built in the early 1990s to cater for the older section of communities and the disabled to allow easy access and is of a 15” gauge. The tramcar itself was built in Walsall on a chassis created by Brett Rogers and TMA Engineering in 1991. Half a mile of track was built alongside the mainline railway between Llandudno Junction and Blaenau Ffestiniog for the tram to travel along and there is a footbridge which not only traverses the tramway and mainline railway but also a 7 ¼ inch railway – this is the only station footbridge in the UK to span three different gauges. Sadly storms on Boxing Day 2015 led to the line being flooded with the winds also taking down the overhead wires and it hasn’t been operational since. 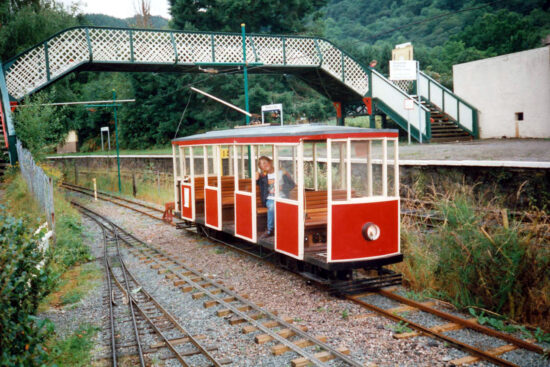