Posted on Thursday 10 August 2017 by Gareth Prior

Another trip into the Blackpool archives for Picture in Time today as we go back to 2004 again for an image of a long withdrawn tram – Brush Railcoach 637.

Entering service in September 1937 637, or as numbered until 1968 no. 300, was the 17th of 20 trams built by Brush of Lougborough primarily ordered to provide capacity during the illuminations with the loss of Lytham trams following the closure of that system. It became just the third of the class to receive a single destination indicator and remained in service up until the end of the 2004 season when it was one of the trams selected for withdrawal as part of the “great mothballing” which saw the operational fleet drastically reduced especially in the crew operated single deck ranks. At the time of withdrawal it carried an attractive all over advert for Blackpool Zoo – a livery it retains today in storage at Wyre Dock. The tram has enjoyed several owners since being made available with initially the Lancastrian Transport Trust then Merseytravel and now a private individual being the custodians of the tram.

This photo is believed to show 637 on its last ever northbound journey on the Blackpool Tramway with a special to Cabin at Gynn Square on a damp 18th September 2004 – its last day in use. Oddly the tram only ran to Cabin and then returned to depot presumably with a fault. It was not to see use again and was then officially withdrawn at the end of the season. It is joined in the frame by Ex-Towing Railcoach 678 which is also on specials and is seen in an all over advert for Radio Wave. Interestingly today the two trams have been reunited at Wyre Dock. 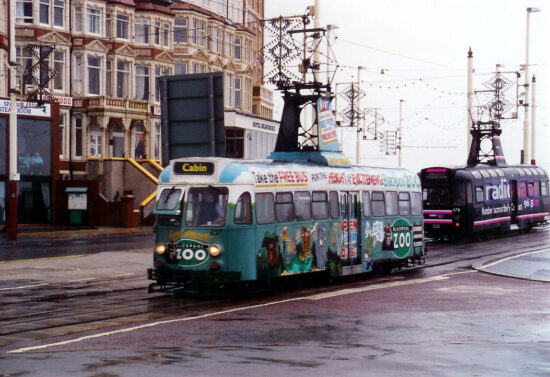