Posted on Wednesday 2 August 2017 by Gareth Prior

Blackpool Jubilee 762 is certainly a tram that polarises opinion but has proven to be popular with children thanks to its old Nickelodeon Land all over advert with various cartoon characters including Spongebob Squarepants on the ends. Over the past few years it is a tram which has seen limited use on normal service days but all that is about to change with the first ever Purple Tram Fridays announced for Crich Tramway Village in August.

On Friday 11th and Friday 25th August 762 will be used in passenger service (subject to the usual availability caveats) between 1030 and 1530 allowing visitors on those days to enjoy plenty of rides on the tram.

Over the years there have often been criticisms that the trams in use are not announced until the day so this is a pleasing development and one which will hopefully prove to be a success with visitors.

So if you want to the see the only operational Jubilee Car in service get yourself down to the Crich Tramway Village on Fridays 11th and 25th August! 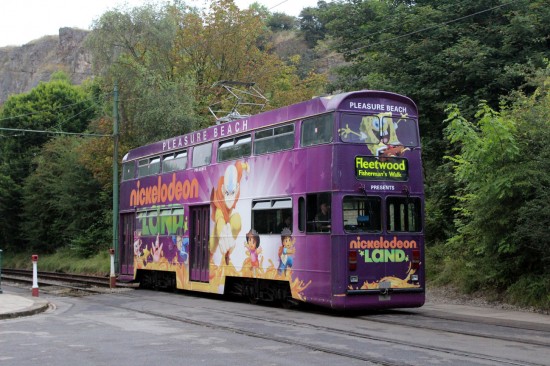 762 in service at Crich on 10th September 2016. It may not be the most popular tram at Crich but the Jubilee Cars form an important part of British tramway history as does the advent of full advertising liveries. (Photograph by Gareth Prior)