After four days services are once again running on the whole Nottingham Express Transit system with repairs completed to the overhead in the Basford area. Trams started to be able to run between David Lane and Wilkinson Street late on Friday 21st July before a full service resumed from the start of service the following day.

As previously reported a section of overhead was brought down around Basford following a fault with the pantograph of Incentro 213 leading to NET services being completed suspended between David Lane and The Forest. Trams continued to run from Phoenix Park to Highbury Vale, Hucknall to David Lane and Toton Lane/Clifton South to The Forest with replacement buses covering the remaining sections.

One by product of the damage to the overhead was that a number of trams were stranded out on the network unable to get back to Wilkinson Street Depot, which was in the isolated section of the network They were stabled at various locations for the duration of the closure with some left in the closed section – including 213 with its damaged pantograph.

The repairs to the overhead were completed on Friday 21st July and after testing services started to return to normal. During Friday evening it was only possible to run through to Wilkinson Street as final repairs and testing were still being undertaken on the final section to The Forest. The evening also saw all of the stranded trams returned to the safety of Wilkinson Street.

Questions will continue to be asked why it took so long to repair a 300 metre section of overhead but for now there is relief all around that services are back up and running and hopefully it will be quite some time before there is major disruption in Nottingham. 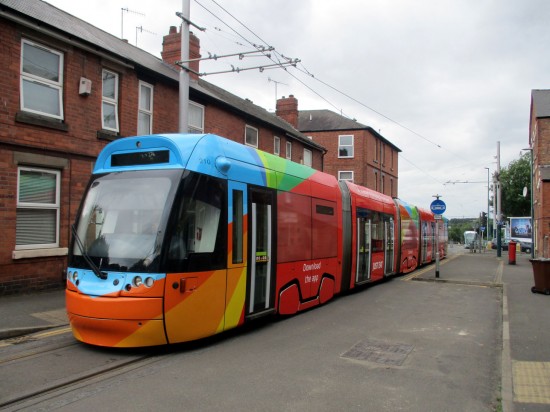 Rather appropriately at lunchtime on Friday 21st July 210 stands at Shipstone Street with pantograph down unable to return to depot. 223 is also stabled in the distance. Further additions have now been made to 210’s vinyl wrap livery and it is now clear it is advertising Just Eat, although maybe there is more to come as it the livery still seems to very sparse. 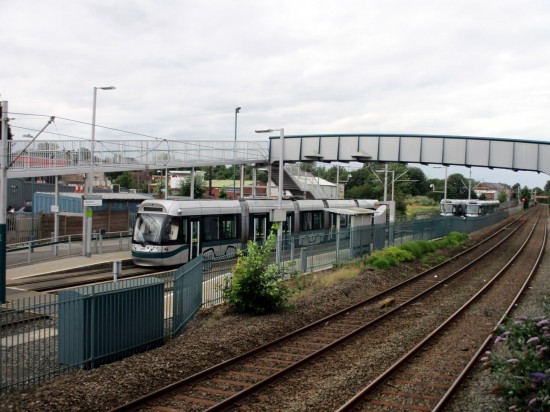 Basford tramstop with the stricken 213 standing in the platform on 21st July. In the distance a further two Incentros can be seen, both with pantographs up. 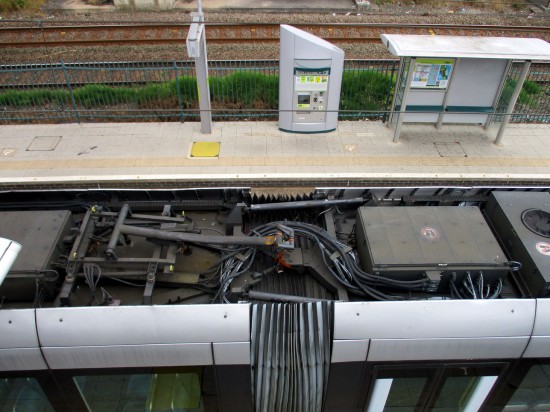 A close-up view of the damaged pantograph of 213, taken from the footbridge at Basford. 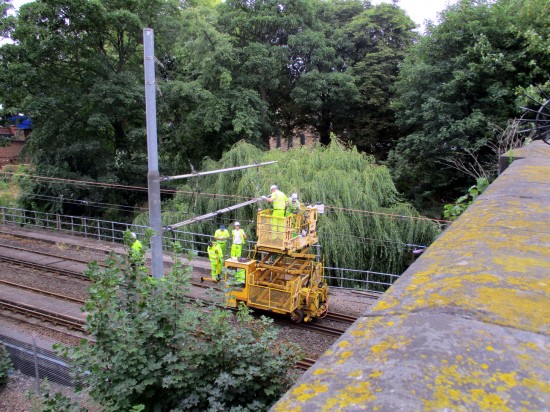 Repair works taking place on 21st July at Church Street. AT this time rewiring was coming to an end with the team using this self-propelled vehicle “Wee Beastie”. (All Photographs by Bob Gell)