Posted on Thursday 29 June 2017 by Gareth Prior

Sometimes there are trams which often seem to encourage people to take photos and they keep cropping up in this series and one such tram is Blackpool Coronation 663.

663 is, of course, one of just three of the once 25 strong class still to survive but of those survivors it is the one which has enjoyed (if that’s the right word!) the most interesting post withdrawal career, a career which has yet to see the tram operate again. Since being withdrawn in 1974 it has spent periods in Lytham, Southport, Bradford, St Helens and Richmond before returning to the Blackpool area in 2003 joining the Lancastrian Transport Trust. Although a limited amount of work was undertaken by the LTT the tram still requires a large amount of work to return the tram to service but it is now back at Rigby Road under the auspices of Blackpool Heritage Tram Tours and awaits the chance for the work to be completed and for it to finally return to service.

In this view we see 663 at Cabin on 5th September 1974 – just a little under two months later the tram would be withdrawn from service for the final time. 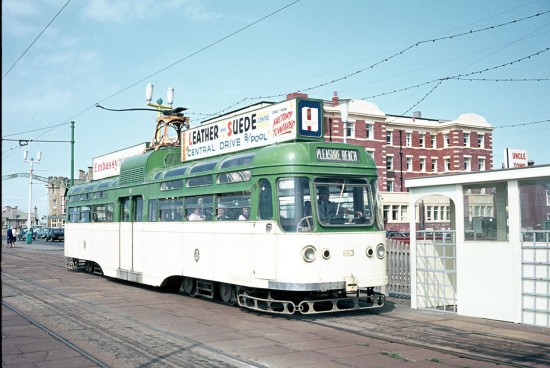