Another collision on Supertram

Posted on Wednesday 28 June 2017 by Gareth Prior

Saturday 24th June saw another low speed collision on Stagecoach Supertram with trams 110 and 116 coming together at Hillsborough Corner at approximately 1630. Damage to the trams only seemed to be minor and no injuries were reported that there was disruption to the Blue and Yellow routes as a result.

116 was on an outbound service on the Yellow route to Middlewood with 110 running inbound on the Blue route to Halfway when the collision happened. This location is the junction where the Blue route leaves the Yellow route with 110 just crossing the outbound track to join the main route to the city centre when the collision occurred. It is not known what caused the two trams to strike each other or even which way round the collision took place but it is presumed that at the very least an internal investigation will take place to find out what caused the two trams to collide.

Following the collision services on both the Blue and Yellow routes were initially curtailed at Shalesmoor before being extended through to Hillsborough as the incident took place beyond the crossover. Full services were resumed by 1900. 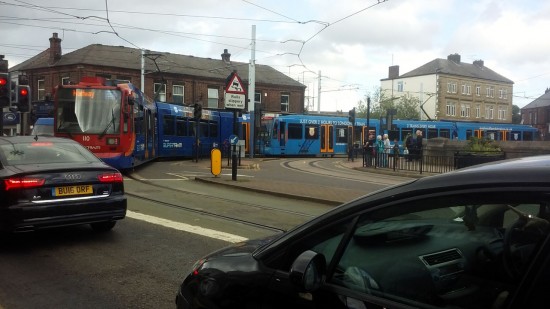 A general view of the collision showing 116 – in East Midlands Trains advert – and 110 at Hillsborough Corner. 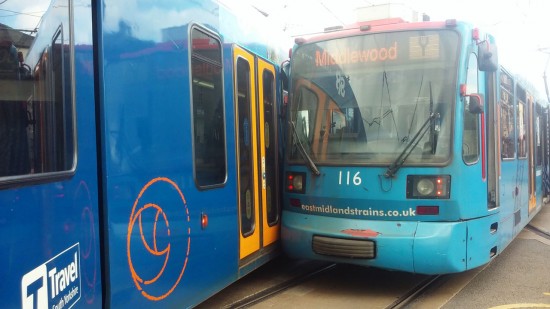 A close-up of the two trams. 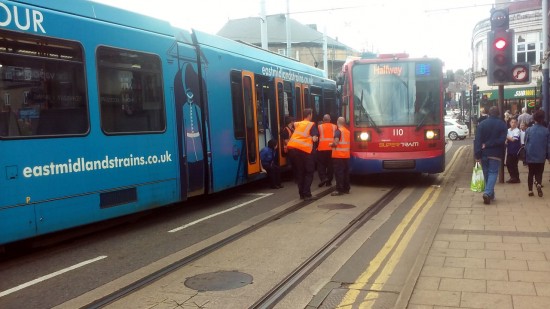 A view from the other side showing the position of 110 coming across the junction. (All Photographs by P Harvey)