Posted on Saturday 24 June 2017 by Gareth Prior

Heading back to 2000 today for Picture in Time as we feature one of several Bombardier CR4000 trams on Croydon (now London) Tramlink to have featured an advertising livery.

The tram in question is 2542 which had been delivered to Croydon on 22nd February 1999 and after the usual commissioning period entered service as the Tramlink network started to open in May 2000. By the time the network opened 2542 had lost its traditional Red and White fleet livery in favour of yellow all over advert livery for Amey – the company who had been involved in the construction of Tramlink alongside Sir Robert McAlpine. The vinyls remained intact on the tram until early October 2001 (having lasted approximately two years in situ) when they started to be removed.

In this view taken during 2000 we see 2542 running along Addiscombe Road between East Croydon and Sandilands with a line 2 service to Beckenham Junction. 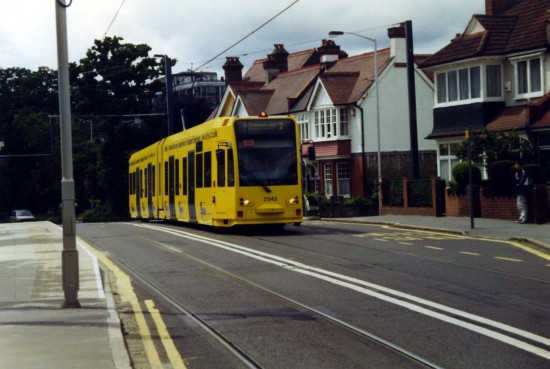