Posted on Thursday 22 June 2017 by Gareth Prior

In this edition of Picture in Time we are back in Blackpool as we take a look at the original Balloon Car – 700.

The tram we now identify as 700 started off life as 226 when it was the prototype Luxury Dreadnought entering service in February 1934. It was soon renumbered 237 when its original number was taken by the production series Open Boat cars and continued to operate in its open top condition until it became the last of the trams to be enclosed in June 1942. Remaining as part of the operational fleet practically ever since 700 – as it was renumbered in 1968 – was chosen for a heritage type overhaul in the 1990s which although using some modern features such as halogen headlights saw the tram receive double indicator blinds again along with original style interior. It was finished in the popular Wartime Green and Cream livery and also received original numbers over the centre entrances and a fake destination blind was also fitted always set to Promenade. It also initially ran with a trolley once again but this was fairly shortlived with a pantograph returned for operational reasons. Despite its overhaul to this standard 700 was one of the Balloons Cars selected for modernisation to be used on the upgraded tramway and today carries the Purple and White Flexity type livery as well as the widened centre entrances.

Both of these photos date from September 2005 and show the tram in its Wartime Green and Cream liveries. In this first image we are at Pleasure Beach as the tram stops on its way to Starr Gate. The date is 4th September 2005. 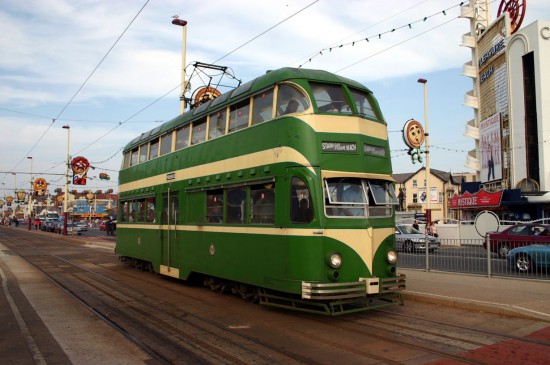 And then on 10th September 700 pauses at Manchester Square bound for Fleetwood with the pantograph grease in evidence along the body sides. 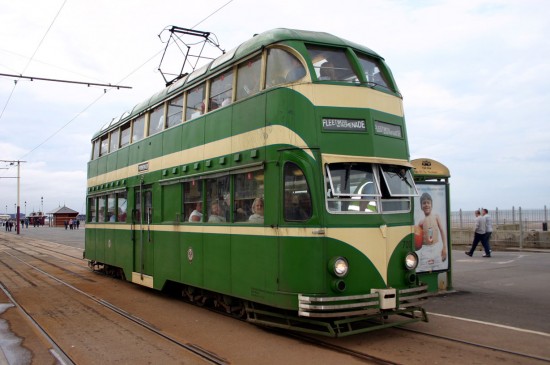