Posted on Saturday 28 July 2012 by Gareth Prior

Since being introduced into service the M5000s on Manchester Metrolink had exclusively operated singly with any double workings being in the hands of the older T68s but this has now changed with double M5000s being used in service to help increase capacity for the Olympic football taking place at Old Trafford. However with Mosley Street stop in the City Centre remaining open the operation of these double M5000s has not been without its problems.

The first double M5000s appeared in service during the week commencing 16th July on the Altrincham route but because of the short platforms remaining at Mosley Street and the fact that the M5000s do not have the retractable steps as fitted to the T68s the operation of these doubles has proved quite a challenge. As a result passengers who wish to travel to Mosley Street are told to only travel in the front tram and upon arrival here the rear tram is kept locked out of use with regular announcements made to passengers informing them of this fact. At all other stops it is possible to operate the double units normally.

It is expected that the double M5000s will remain in service for the duration of the Olympic football but following that all double trams will be in the hands of the T68s until such a time as Mosley Street has been closed. The closure of this stop requires passenger information displays to be installed in Manchester City Centre informing passengers whether the next tram for Bury/Altrincham will depart from Piccadilly Gardens or Market Street and this is dependent on the full application of the new signalling system. 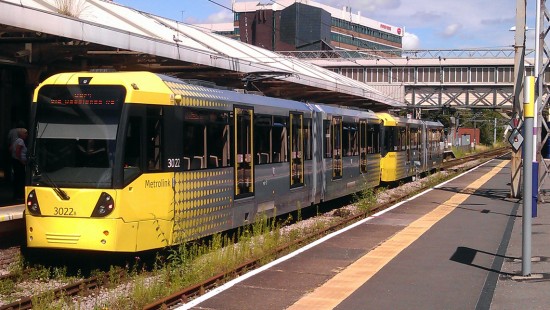