Back to the archives with Picture in Time this time settling in South Yorkshire for an image of Stagecoach Supertram 103 in 2003.

103 was delivered to Sheffield’s Nunnery Square Depot and was originally number 03 wearing the Grey based livery up until the time that Stagecoach were selected as the operator. Once this took place the plain Grey livery was replaced by Stagecoach’s house colours which at the time led to a mainly white livery orange, red and blue stripes. Initially this livery also featured white at the bottom but a revised livery was applied afterwards which saw a dark blue section immediately below the lighter blue stripe. It is this latter livery that 103 is carrying when it was caught in 2003 at Fitzalan Square having just left the Park Square Bridge. It is running a Purple route service to Meadowhall which will run up to Meadowhall before reversing and traversing this stop again. 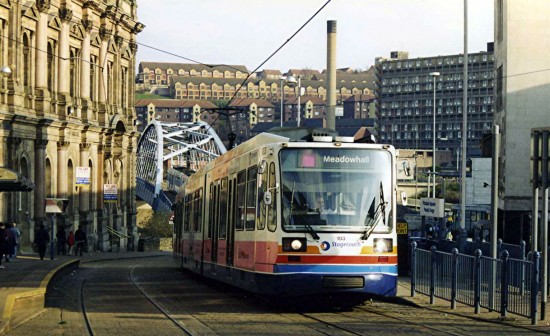