Posted on Sunday 31 January 2016 by Gareth Prior

We are heading back almost 15 years for the latest instalment of Picture in Time with an image from August 2001 of Midland Metro T69 05 whilst it was still carrying the original fleet livery.

05 was delivered to Wednesbury on 10th July 1998 and entered service shortly after the system opened in its entirety at the end of May 1999. The tram continued about its normal day to day business of running between Birmingham Snow Hill and Wolverhampton St George’s for eight years until it was involved in a collision with a fire engine during May 2007 was required it to be withdrawn from service for repairs to be damage caused. 05 was to be spend nearly two years out of service and when it returned to use in February 2009 it was the fourth (and last) of the T69s to have been painted in the Network West Midlands Magenta and Silver livery style. Once again the tram settled into a regular pattern of operation before being withdrawn from service in November 2014. This was expected to be the end of its initial operating life in the West Midlands but it was reinstated in January 2015 before being withdrawn once again the following month and this time its withdrawal was permanent and it was not set to carry passengers again. At the time of writing 05 remains stored at Wednesbury.

In this photo we see 05 approaching the Network Rail platform at Birmingham Snow Hill on 3rd August 2001. The tram will now run along the platform face before arriving at the now closed Metro platform. 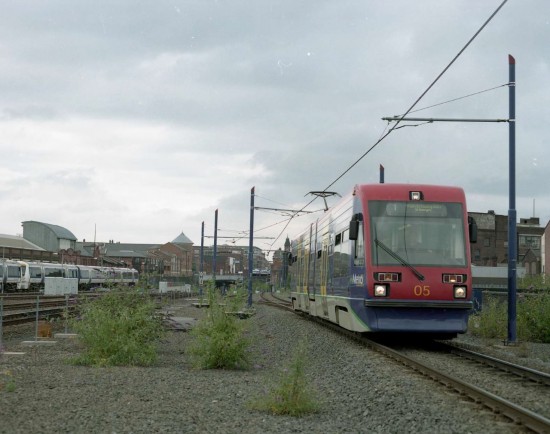