Posted on Friday 11 December 2015 by Gareth Prior

Some 10 days after arriving in South Yorkshire the UK’s very first tram train has been officially unveiled at Stagecoach Supertram’s Nunnery Square Depot with local and national politicians on hand to see just what all the fuss is about. As we have previously reported 399 201 arrived in Sheffield on Monday 30th November and since arriving has seen the completion of its livery and has also made its first tentative moves around the depot complex.

Thursday 10th December was the day chosen for 399 201 to be officially unveiled to the media and other interested parties with the official unveiling undertaken by Andrew Jones, Transport Minister. Mr Jones had this to say about the tram trains: “The unveiling of the UK’s first tram train is a major milestone and paves the way for an impressive new fleet of passenger vehicles to come into service from next year. This government-funded pioneering project will help transform travel in South Yorkshire with better journeys and improved connections. It will also boost the economy of the local area and beyond. Good strategic transport links and infrastructure are central to rebalancing the economy, bringing the country closer together and the success of the Northern Powerhouse.”

Margaret Kay, Stagecoach Supertram Managing Director, added: “We are delighted to welcome the first tram train to the Nunnery Square depot. It’s exciting to see this new state of the art vehicle in its new home. We very much look forward to inviting our customers onboard next year so they can begin benefitting from this great addition. In the meantime we will continue to train our new drivers and test the new vehicle at both the depot and across the network.”

It is planned that the tram train service will start operating between Sheffield and Rotherham Parkgate from early 2017 (the service is expected to run from Cathedral to Rotherham Parkgate) once the infrastructure is in place and the tram trains have gone through the full commissioning process. The pilot scheme is due to last for two years but if this is proved to be successful it will continue to run as a local service. But you shouldn’t have to wait that long to enjoy a ride on one of the tram trains as ahead of this at least some of them are expected to be used on the current Supertram network to enable extra services to be run.

A schedule of when things should happen with this project has also been released:

Winter 2016 – Completion and electrification of the tram train network 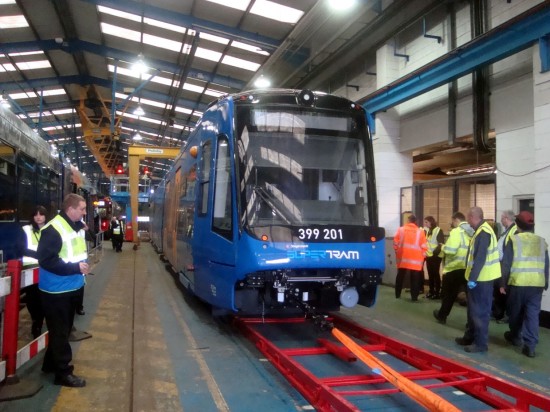 3992 201 is seen during the unloading process at Nunnery Square on 1st December. (Photograph by Stuart Cooke)