In Pictures: The UK’s first Tram Train arrives in Sheffield

Posted on Tuesday 1 December 2015 by Gareth Prior

At 2140 on Monday 30th November a little piece of history was made when the very first tram train arrived at its new home following a lengthy journey from Spain. The Vossloh built vehicle arrived on the back of a Allelys low loader in the dark and was driven into the confines of Nunnery Square Depot and spent its first night in South Yorkshire awaiting unloading.

399 201 had left the Valencia works of Vossloh ten days earlier and made its way to Sheffield via boat from Santander to Southampton and was then driven up the country via the M1 before arriving in the steel city. Following arrival at Nunnery Square the tram train spent one more night on the low loader before it was unloaded the following morning.

The vehicle will now be fully commissioned and tested with this process likely to take many months. There are seven on order of which four will be required for the tram train service to Rotherham with the rest to aid capacity on the current Supertram network. It is expected that the latter three will enter service ahead of the opening of the tram train service in early 2017. 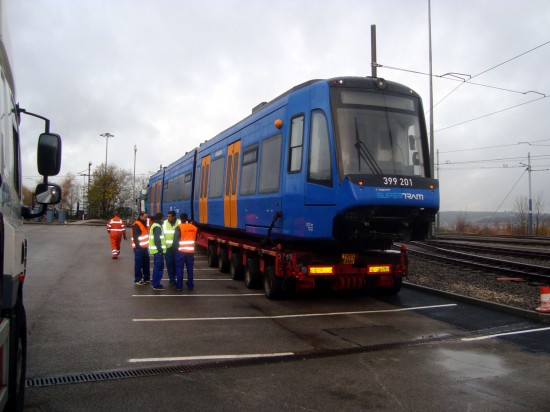 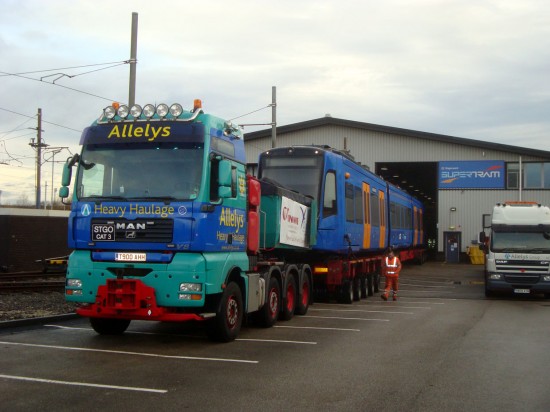 Two views of 399 201 whilst still on the back of the low loader during the morning of 1st December 2015. (Both Photographs by Stuart Cooke)

11 Responses to In Pictures: The UK’s first Tram Train arrives in Sheffield