Posted on Tuesday 22 September 2015 by Gareth Prior

In 1968 the Tramway Museum at Crich held their very first Transport Extravaganza. As previously reported in “Picture in Time” Prague 180 arrived during the build-up to this event but that was only one of the stars of the event and today this series features an image of two of the other trams involved: Sheffield 510 and Blackpool 49.

This view was taken on 1st September 1968 – which was actually the August Bank Holiday weekend in 1968 as at this time this public holiday was celebrated on the weekend of the last Saturday of August – and is taken from the bank roughly where the Bowes Lyon Bridge is now situated. We are looking towards the depots and Town End and the two trams which are the most notable are two of the early stalwarts of the service in Sheffield 510 and Blackpool 49.

510 is of course part of the operational fleet today and when this photo was taken was in its first bout of operation at Crich between 1964 and 1972. It retains the original Last Tram livery and is heading north towards the camera. Note that ahead of it is just standard track and not the interlaced track we see today. Immediately behind 510 is Blackpool 49 which at this time was in Blackpool Corporation Transport Red and White livery rather than the Green and Cream it carries today. As with the Sheffield car 49 had entered service at Crich in 1964 but was to remain in the serviceable fleet for an extra year until 1973. However unlike 510 Blackpool 49 is no longer serviceable having last run in 1992 and is seemingly quite a way down the list of trams to be returned to service. 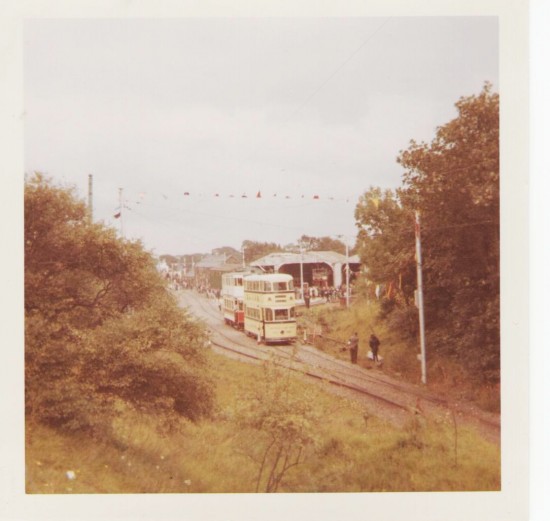