Posted on Sunday 20 September 2015 by Gareth Prior

Today Picture in Time finds itself in the capital city as we head to Croydon Tramlink again for a view of a tram in the early days of the system. The tram in question is CR4000 2537 and the date is day one of the Beckenham Junction route – 23rd May 2000.

Bombardier Flexity CR4000 tram 2537 is seen terminating at Beddington Lane on a route 2 service from Beckenham Junction. The photographer cannot remember why this was so other than it was possibly tied up with the opening of the network which was opened in stages. The date was 23rd May 2000 which was the first day of operation on the Beckenham Junction branch. The original route structure was 1 Elmers End – Wimbledon, 2 Beckenham Junction – Croydon and 3 New Addington – Croydon. 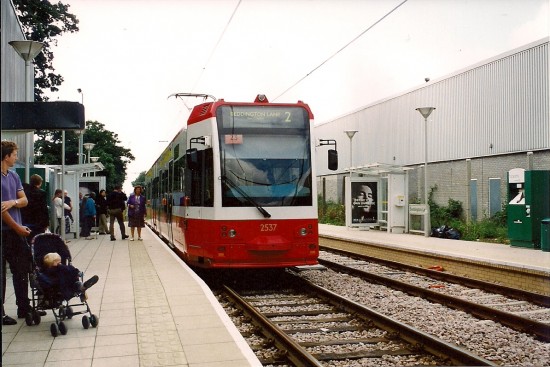