Crich pull out all the open tops for ‘TMS 60’

The annual Enthusiasts Day at Crich Tramway Village on Saturday 19th September 2015 was an extra special event, celebrating 60 years since the formation of the Tramway Museum Society. As well as the usual intensive tram service an exciting programme of events was planned with the museum’s impressive and varied collection of open top tramcars taking centre stage. Add in a tram launch, an old friend making a one-off appearance in service and plenty of sunshine and you have a fantastic day of tram action!

Although the event was never expected to top last year’s incredible ‘Electric 50’ weekend, a very impressive total of 22 passenger trams were available for service and all of them managed to run in passenger service at some point during the day. Of these the highlight was arguably Southampton 45 making a special one-off return to service having been withdrawn last year. This tram performed an unusually early departure in service from Town End to enable early visitors to enjoy a photo opportunity with all four serviceable open top double deckers at Wakebridge: Southampton 45, LCC 106, LUT 159 and Glasgow 1068. These trams then ran in normal service during the morning along with Chesterfield 7 (still in its Recruitment Car guise), Blackpool 167, Oporto 273, Leeds 399, Sheffield 510, Blackpool 762 and London Transport 1622.

Another of the stars of the day was Liverpool 869 making a very welcome return to service following an overhaul, and this car was officially re-launched outside the workshop at 1100 before leading a short procession of 1930s trams to Glory Mine and then back to Town End. This consisted of Blackpool 236, Leeds 180, Glasgow 812 and Metropolitan 331 (all of which were built in the 1930s except 812 which is restored in ’30s condition). On their return cars 331, 812 and 869 all entered service with the others returning to the depot for a break before returning to the main line later on in the day. Berlin 3006 also emerged for a short time and also managed a couple of further trips during the afternoon.

Whilst all of this was going on the workshop team were busy preparing for the main photographic opportunity of the day: a display of all nine electric open-top tramcars currently on site. This would include five trams which are not currently operational and rarely appear outside, and the first of these to come out for a day in the sun was Hill of Howth 10 which was placed on the siding in the centre of the depot yard, which had been vacated by the Croydon works vehicles which spent the day stabled at Glory Mine. This was followed by the rarest tram of all to appear – Derby 1! This tram was moved out of the Exhibition Hall and positioned in front of the Exhibition Hall remarkably easily considering how little it has moved in the recent past, and it made a fine sight in the early afternoon sunshine. No effort was spared with instruction given to place the chocks on its wheels on the side nearest the Exhibition Hall so as not to spoil people’s photos, a small gesture but one which deserves mention and appreciation. After a break, attention was once again turned to the Exhibition Hall with both Douglas Head Marine Drive 1 and Blackpool 4 being moved outside to take their places in the yard, with the former briefly moving into the running sheds before being placed on the traverser, allowing the Blackpool conduit car to be sandwiched between this and Derby 1; a more unusual line of trams on a single track would certainly be hard to find! With the four open top trams in service returning to the depot yard and Newcastle 102 also being dragged outside by the Blackpool electric locomotive the depot fan was completely filled by open toppers, so much so that it was virtually impossible to fit them all into a single photograph! That said many of us tried, and came away with some amazing combinations in lovely sunshine.

There was still plenty of action on the main line with Leeds 180 and Blackpool 236 coming back out after their appearance in the morning procession whilst some of the service cars retired early, being replaced by the remaining serviceable trams which had not yet turned a wheel: Blackpool 40, Sheffield 74, Blackpool 166, Leeds 345 and Blackpool 630. The works cars were not left out either with Cardiff 131 operating throughout the afternoon whilst the Blackpool loco did some journeys as well, both carrying passengers. As is often the case, the one downside of having so many trams out at once is that the main line does get rather congested and therefore tram rides take longer than normal, although this is clearly a small price to pay to have such a great selection of cars to choose from. All too soon the day was drawing to a close with the various open toppers being put away and Brussels Snow Broom 96 briefly emerged to be put back in front of Howth 10, having spent the day inside Depot V along with Blackpool & Fleetwood 2 which had also been moved earlier to enable the removal of Derby 1 from the Exhibition Hall. The final trip of the day was performed by Southampton 45 and Glasgow 812, two trams which are not expected to run again without major workshop attention, and therefore providing a fitting finale to the day.

Clearly not daunted by the pressure of following last year’s spectacular events, ‘TMS 60’ was another wonderful showcase of the national collection and all who were involved in making such a superb event happen deserve to be thanked, particularly those involved in the organisation. The only real downside of such a good event is that it is very hard to get as many tram rides as one would like due to the fear of missing something even more exciting, although that is certainly not a criticism and it is always better to have too much to see and do than too little! One final plea, however… whilst the staff and volunteers at Crich all seemed keen to ensure that everyone enjoyed their day, a few enthusiasts did spoil the mood slightly by complaining about visitors who were simply walking around the museum site, unaware that they were getting in the way of someone’s photos. Yes, it can be annoying, but everyone has as much right to be there, so please let’s not give our hobby a bad name and respect that not everybody enjoys their day in the same way? After all the general public need to come and spend money at the museum so that we can all enjoy events of this calibre, of which I for one hope there will be many more in the future. 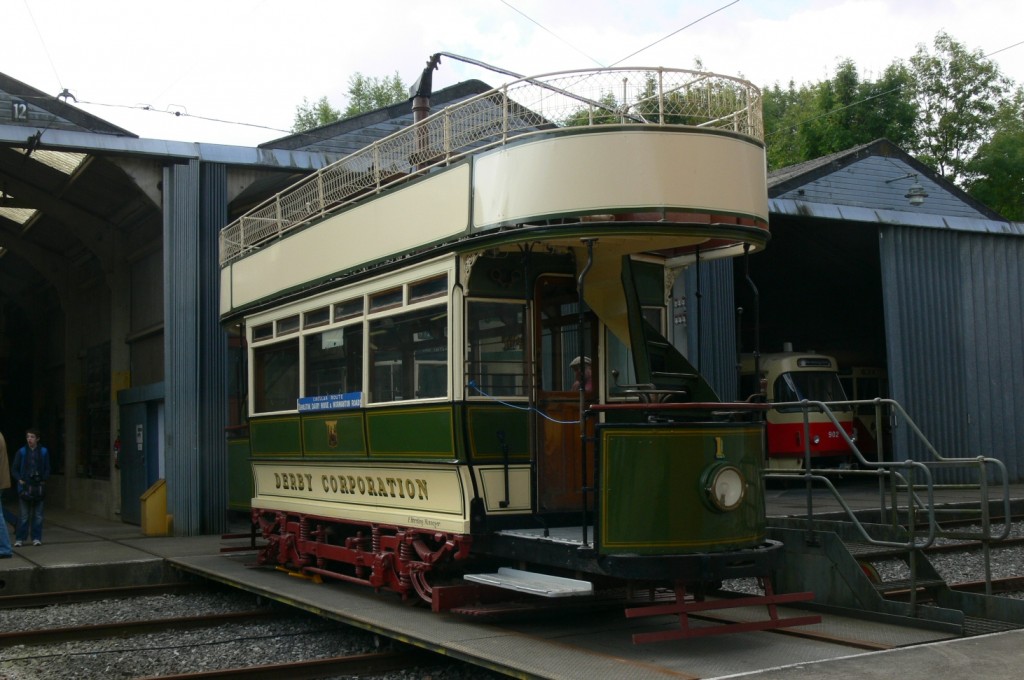 An extremely rare sight with Derby 1 on the traverser at Crich before taking its position ready for the afternoon photo opportunity on 19th September. 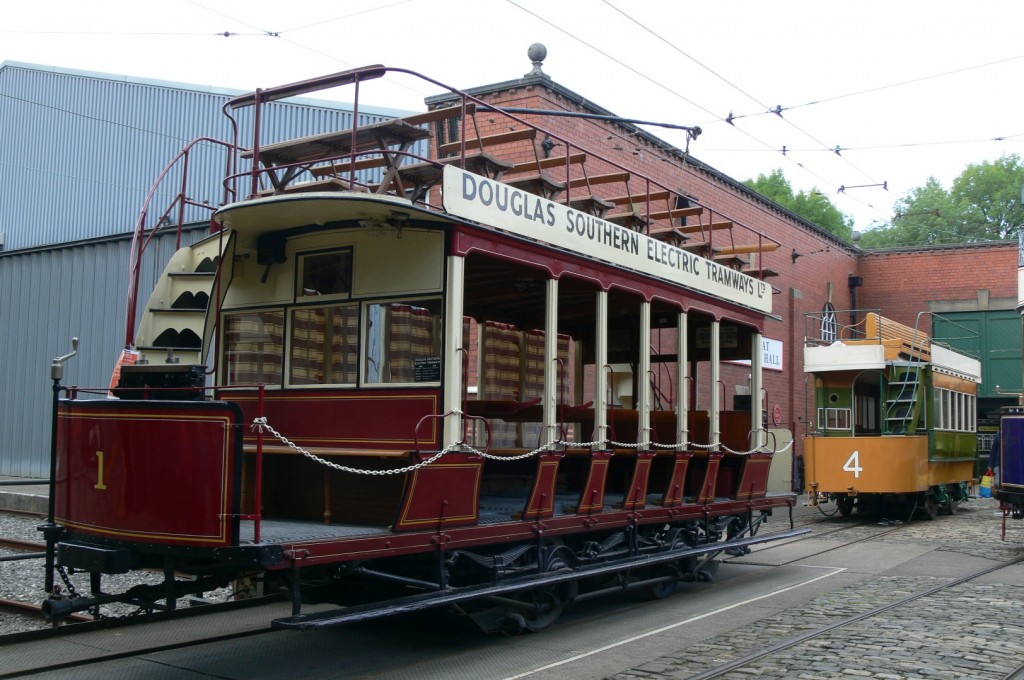 Two of the most unusual open top trams at Crich also make a rare appearance outside the Exhibition Hall - Douglas 1 and Blackpool 4. 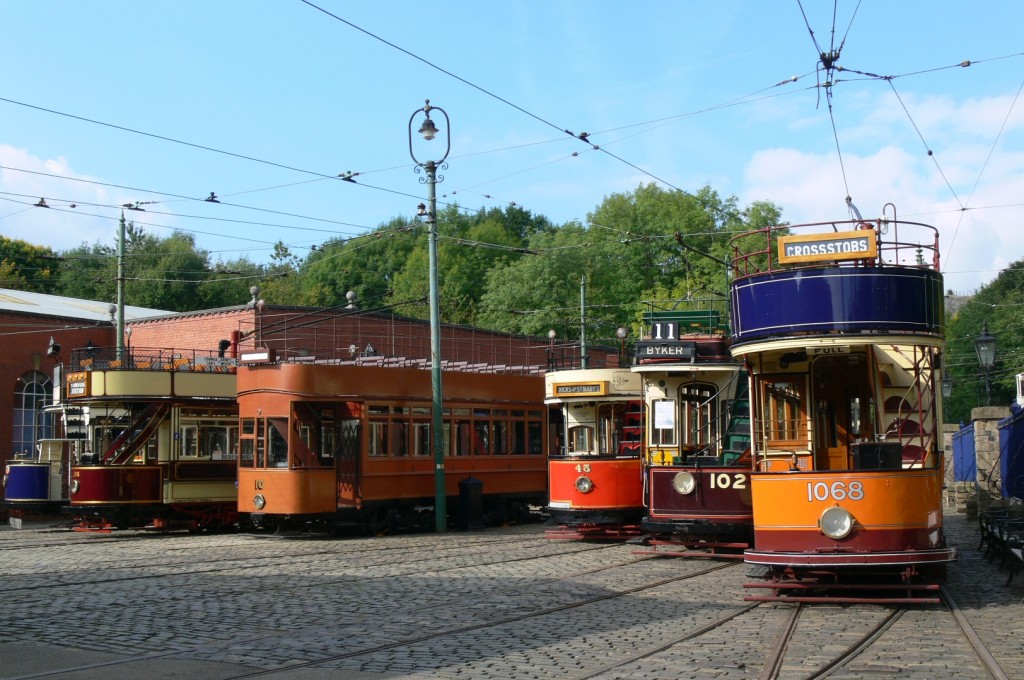 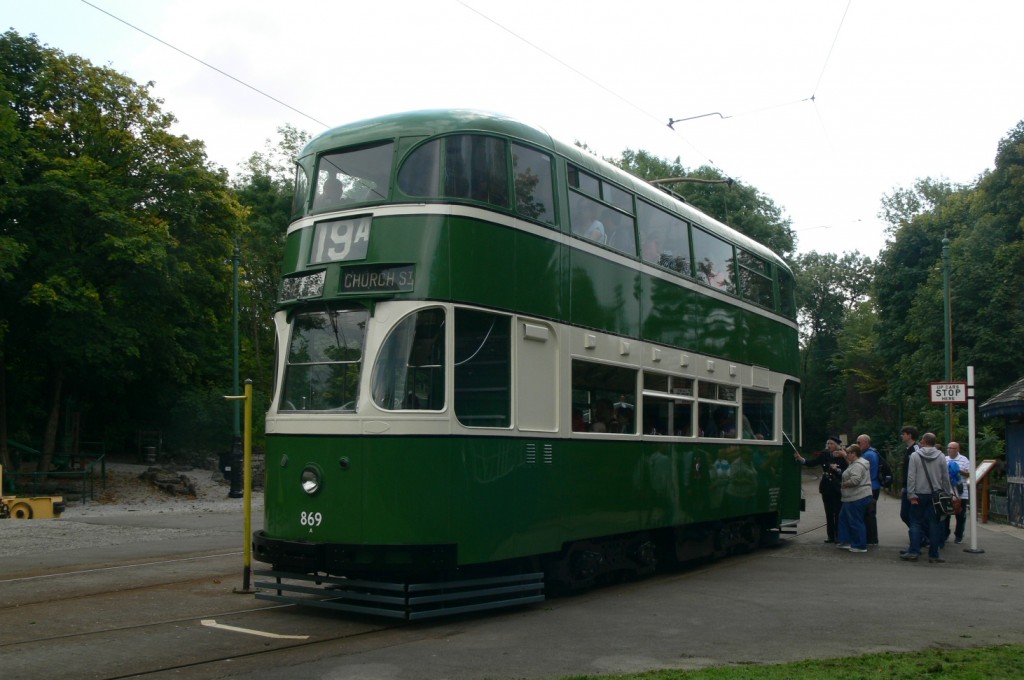 TMS 60 wasn't just about open top trams of course and another of the stars of the show, Liverpool 869, is pictured at Wakebridge shortly after being launched back into service following a major overhaul. (Photos x 4 by Andrew Waddington)