Posted on Friday 18 September 2015 by Gareth Prior

We are back with the Illuminated Trams of Blackpool for our latest Picture in Time image and this time the tram featuring is the Hovertram 735 which is seen at rest in the depot in 1973.

By the time this photograph was taken the Hovertram had been part of the Illuminated tram fleet for 10 years having been converted from English Electric Railcoach 222 in 1963. The only true double deck Illuminated feature car 735 had a seating capacity of 99 and continued to be part of the running illuminated fleet until the end of the 2001 Illuminations when it was withdrawn requiring significant attention to return it to use. Unlike fellow feature cars the Western Train and the Frigate this work was not to happen and in 2007 it departed for Scotland and preservation. It remained north of the border for seven years before it was acquired by the North East England Traction Trust and made the move to Sunderland in 2014 where it remains today.

This photo was taken at a time when it was perfectly acceptable for members of the public to take a wander around Rigby Road Depot and shows the Hovertram as part of a sandwich between the Rocket and the Western Train on 23rd June 1973. Interestingly despite this being June the Rocket and Hovertram both have their lights on. 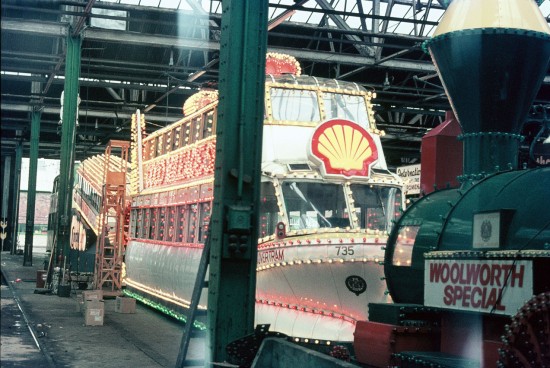