Posted on Tuesday 15 September 2015 by Gareth Prior

For the past few years we have known the featured tram in today’s “Picture in Time” as Glasgow 1068 but the majority of its existence it has been better known as Paisley 68 and that is exactly what the tram was running as in 2007 when running at Crich.

Built in 1919 by Hurst Nelson 68 was to operate for just 4 years for Paisley Corporation Tramways before the undertaking was taken over by Glasgow Corporation Tramways. Renumbered as 1068 the tram was eventually fitted with an enclosed top deck and ended up its life in Glasgow as a fully enclosed tramcar. It was the last remaining Paisley car in Glasgow and was set aside for preservation leaving its home to arrive at Crich in September 1960. It was not to run in preservation until 1978 at which point it had been restored back into open top condition as Paisley 68. It was one of the lucky trams to be used at the Glasgow Garden Festival in 1988 and has also been a mainstay of the fleet at Crich since it was first returned to use with only a few years when its hasn’t turned a wheel in anger. Its life as 68 came to a (temporary?) close in 2012 when it was painted into the blue route Glasgow livery to play a major role in that September’s Glasgow 50 events at Crich. In 2013 it became the first Scottish tram to run at Beamish for a short loan period and remains a very popular member of the Crich fleet.

This view was taken on 27th August 2007 and shows Paisley 68 unloading at Wakebridge with a service heading back to the main museum site. 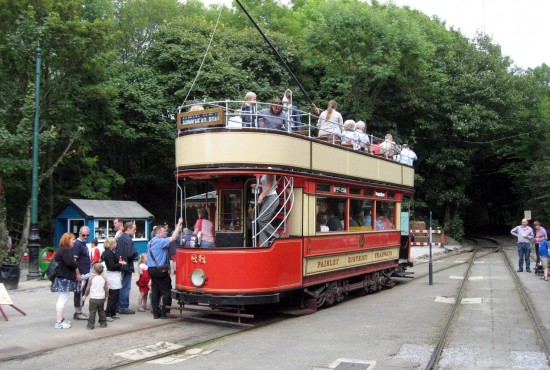