Posted on Friday 11 September 2015 by Gareth Prior

With the Blackpool Illuminations shining again we head back to the northwest’s premier holiday resort for today’s Picture in Time image and the time machine has stopped in 1961 this week for a view of one of the Standard Cars decorated for the illuminations.

It would be fair to say that the late 1950s saw a change in how Blackpool Corporation Transport sought to use their trams for the annual Illuminations (the “Greatest Free Show on Earth”) with the start of Illumination tours using their main first batch of illuminated feature cars. The capacity of those feature cars was quite low in comparison with what would follow (and an indeed by the mid 1960s they had all been withdrawn) and so the decision was made to put some lights on a couple of the remaining Standard Cars. The two trams chosen were 158 and 159 with bulbs fitted around the windows and edges of the cars with two stars also fitted on the ends (one below the cab window and one between decks). Both of the trams first “starred” (sorry pun intended!) in this format in 1959 and continued to operate in this form during the Illuminations until 1966 when they were withdrawn. Both trams survived with 159 heading to the East Anglia Transport Museum where it has been one of the mainstays of the operating fleet for 40 years whilst 158 wasn’t so lucky as it went to Crich for the main purpose of supplying spare parts and following this the remains were scrapped in 1978.

This photo was taken on 11th October 1961 and is outside Rigby Road. Identification of which of the trams it is was not recorded but the second Standard can also be seen in the background actually within the depot. 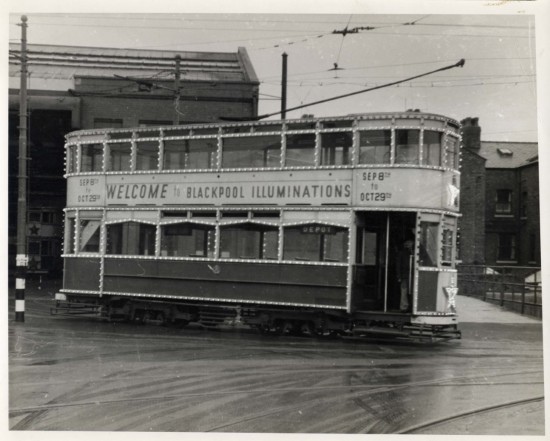