Sheffield 264 takes to the tracks (sort of!)

The restoration of Sheffield 264 at Beamish Museum has reached another landmark on 9th September. Whilst the body work remains incomplete, the truck has now been fully overhauled and reassembled, and on this day it was taken out for an unusual test run with Blackpool 31 providing the motive power.

Before the museum opened to visitors, the novel convoy of 31 and the immaculate truck headed onto the main line, briefly being halted in the Town street for a photo stop. The idea of this run was to ensure that the various new or overhauled parts of the truck were all moving as they should and that the truck was riding well. With the trials completed satisfactorily, the truck was moved back inside the tram depot to await further progress on the rebuilding of the tram itself. It is expected that in the next few weeks, the main components of Sheffield 264 – its truck, lower deck and upper deck – will be reunited and then final work can proceed ahead of the car’s eagerly awaited return to service for the first time since 2003. Unfortunately, the ambitious proposal to have the tram running this summer have obviously failed to materialise, but at some point during 2016 this attractive open-balcony tramcar should provide a very welcome boost to the operational fleet of trams at Beamish.

In the meantime, the museum has struggled to cope with demand with only five trams available for service since Blackpool 680 left for Heaton Park (and later moved again, this time to Blackpool). Problems with Oporto 196‘s lifeguards during the summer have not helped matters either, although Grimsby & Immingham 26 has seen an increased amount of use to help out. As an aside, one of the fleet will be put in the limelight at the last of this year’s weekends of enhanced transport activity on 7th & 8th, which will feature some internal combustion engines and also celebrate Newcastle 114‘s 114th birthday! 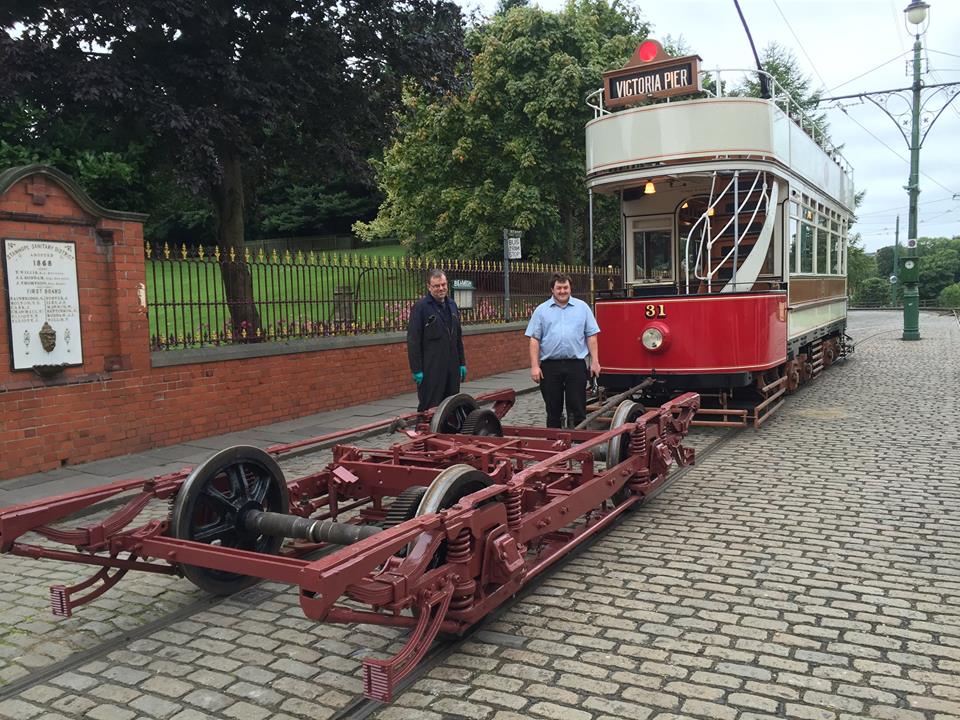 Minus body, the truck of Sheffield 264 can be seen to full effect in the main street at Beamish during its main line appearance on 9th September, towed by Blackpool 31. (Photo courtesy of Beamish Museum Facebook page)