The first in a new irregular series we take a look at the Douglas Horse Tramway with a brief history of the line and a description of the current operations of the tramway. Words by Ken Jones.

The Douglas Horse Tramway is one of the few remaining horse tramways surviving in the world and is the only one surviving in the UK. Built originally by Thomas Lightfoot and Sons, services began on 7th August 1876 and have continued ever since apart from a period during World War II when part of the promenade became a prisoner of war camp.

In 1882, Lightfoot sold the line to Isle of Man Tramways Ltd, later the Isle of Man Tramways & Electric Power Co. Ltd, which also owned the Manx Electric Railway. The company went into liquidation in 1900 as a consequence of a banking collapse. The tramway was sold by the liquidatorto Douglas Corporation (now Douglas Borough Council) in 1902.

Since 1927 the tramway has run in summer only.

In 2015 Douglas Borough Council partnered with Isle of Man Transport to introduce the ‘Ticketer’ system as used across the Island’s other public transport systems. On board a Ticketer hand-held unit connects with the island-wide contactless Go Cards and individual tickets can also be purchased.

The line is 3ft gauge and double track throughout. It runs for about one & half miles along the sea front, from near the ferry terminal [it used to go as far as Victoria Pier] in the south to a northern terminus near the Manx Electric Railway, where the depot can be found. The stables are on the promenade some way back towards the southern end.

It was as recent as 1980s that it boasted a service until 11pm, with a tram every few minutes. Nowadays it operates every 20 to 30 minutes with the last tram in the early evening. The cross over places along the route are still in place but not used apart from each end. In 2014 there was an official last day of running as the tramway is to be rebuilt on the promenade away from traffic. New plans were submitted this year and so for 2015 the horse tramway is still in use.

Many cars that see little use are kept in the sheds adjacent to the station; they are in a number of styles. These include

Several cars were stored off-site for a number of years having been moved to a transport museum in the north of the island for display in 2009; No. 22 now serves as a souvenir shop in much the same way as it did when located at the tramway terminus for a number of years. I’m sure it was in use as such when I first visited the island in 1973. The remaining cars are stored at the museum but as they are privately owned no further work has been carried out to them.

I visited the Island in July [2015] with my wife, 35 years since we went on honeymoon to the island. We had permission to visit the depot and museums and all the pictures were taken with the full co-operation of relevant staff. We saw all the horse trams with the exception of number 49.

* Photographs from Ken’s recent visit to the Douglas Horse Tramway can be found at http://www.britishtramsonline.co.uk/gallery548.html. 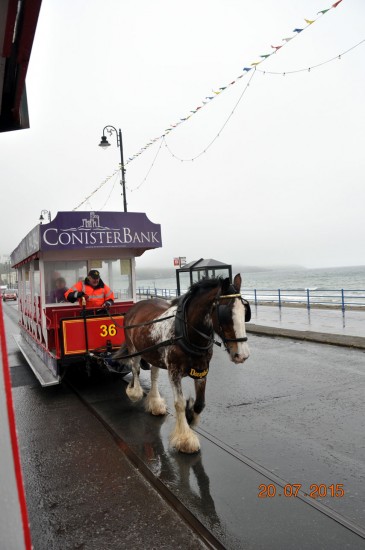