As I look out the window this evening at the weather at the pouring rain (it is meant to be summer isn’t it!) I have gone through my archive of photos for an image of a tram in the wet and the first one I have come across is of Blackpool Ex-Towing Railcoach 680, a tram which has been in the news already this year as a result of it moving to its home tramway at Heaton Park before a further move to its old home of Blackpool.

In this view we see 680 in the remnants of an all over advert for the Merrie England Showbar at North Pier with the addition of some interesting yellow chevrons on each end. 680 had received the advert in 2006 and retained the full advert for two seasons before the vinyls were removed and, like so many trams around this time in Blackpool which had seen the ending of an advertising contract, no effort was made to give the tram a full repaint which led to this rather plain livery. The tram ran for the last time at the end of the 2008 season and was then acquired by the Manchester Transport Museum Society for eventual operation at Heaton Park. It was to be a further six and a half years before 680 – renumbered as 280 following a repaint into all over cream – was to actually see Manchester though with it not arriving at its new home until March 2015. In the intervening period the tram had undergone a repaint, remained stored in Blackpool before moving for a loan period at Beamish where it ran for over a year from January 2014. It is now planned that the tram will run for the last time at Heaton Park on 8th/9th August during a special Blackpool themed event across Greater Manchester before being repainted into Green and Cream ahead of a further loan period, this time back home in Blackpool where it should be running in time for the 130th anniversary events in September.

This photo was taken on 6th September 2008 and is at North Pier with the old track layout in evidence whilst the old Promenade in also still extant. It may only be seven years ago but the whole scene is completely different today. 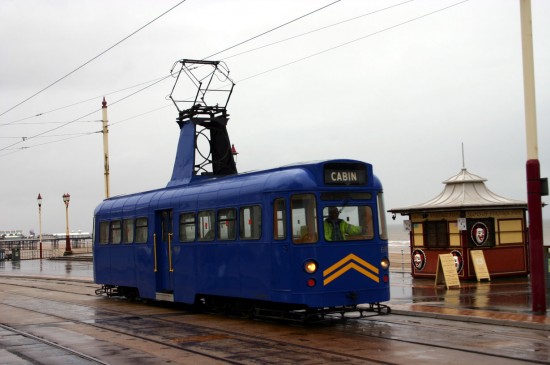