On Wednesday 15th July, an unusual visitor arrived at Crich in the form of London omnibus B2723 – better known as the ‘Battle Bus’ from London’s Transport Museum. The bus in its distinctive khaki livery was one of the star attractions at the museum’s First World War event which has replaced the previous Edwardian Weekend this year, and whilst it may not be a tram, its presence seemed worthy of mention here.

The open-top bus dates from 1914 and was recently restored to working order with financial assistance from a Heritage Lottery grant. Initially outshopped in typical London red, late last year it was restored to its wartime guise representing the many buses used to transport troops in the First World War. Crich is actually the second tramway it has visited in 2015 as it was also present at Beamish for the Great North Festival of Transport in April, as part of a busy summer of attending various events across the country.

The bus arrived at Crich on 15th July aboard a low loader supplied by Scotts Heavy Haulage and was quickly unloaded and driven along the period street, where it mingled with the trams in service which included horse tram Sheffield 15 making one of its midweek appearances. The bus has since been used to give rides around the museum site and has even been posed on top of the Bowes Lyon Bridge, as well as visiting the nearby monument where some serving soldiers who were paying their respects to those lost in action posed with the bus.

The Battle Bus will run at Crich again over the weekend of 18th & 19th July as part of the ‘Great War’ event, before heading back to London. Whilst its visit may not be a big deal to tram enthusiasts, it has given the event a worthy star attraction and following on from the visit of a London trolleybus from Sandtoft last month, it is good to see the TMS working with other organisations to secure interesting vehicles on short-term loans to make their special events more exciting. Here’s hoping that the next such visitor might run on rails though! 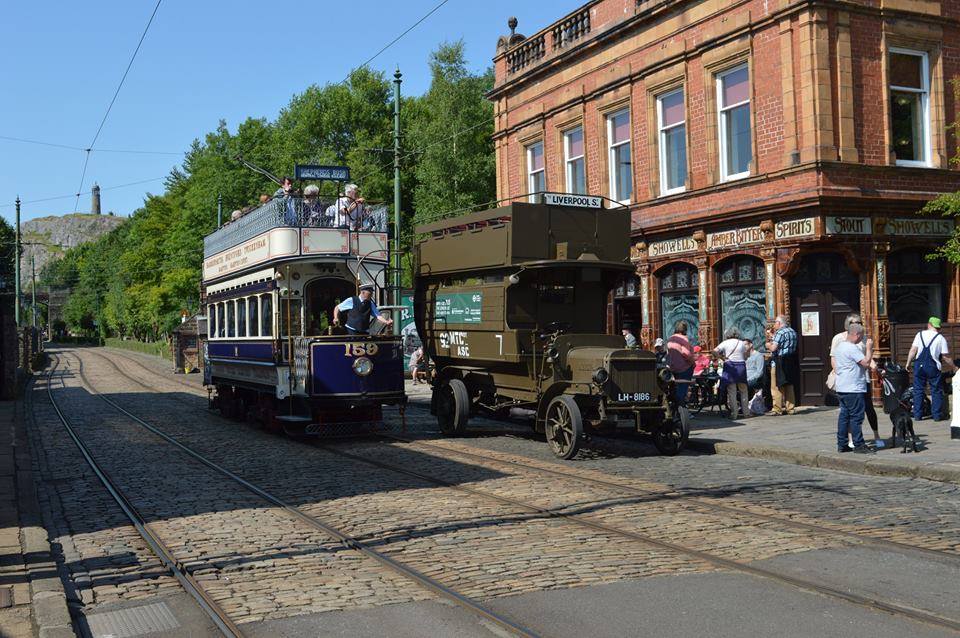 Two contrasting London open toppers meet outside the Red Lion public house at Crich as LUT 159 passes 'Battle Bus' B2723 during its brief stay at the museum. (Photo courtesy of Crich Tramway Village)