Posted on Thursday 16 July 2015 by Gareth Prior

And once again we take a look at just where you can enjoy a ride on a heritage tram in the British Isles as we are “Going for a ride…”. Last week we inadvertently said there were no special events taking place although that was actually rubbish as the Crich Tramway Village’s The Great War: The Home Front has been taking place since Monday 13th july and will continue until Sunday 19th July with highlights including Chesterfield 7 as the recruitment tram and, despite not being a tram still worthy of a mention, the London Battle Bus is visiting. Away from Crich and there is another weekend of more intensive operation in Blackpool with a Green timetable on Saturday 18th July and a special Gold timetable on Sunday 19th July which includes heritage trams running to Fisherman’s Walk throughout the day. And then it isn’t too long until the Manx Heritage Transport Festival so plenty to keep you occupied as summer really gets going. 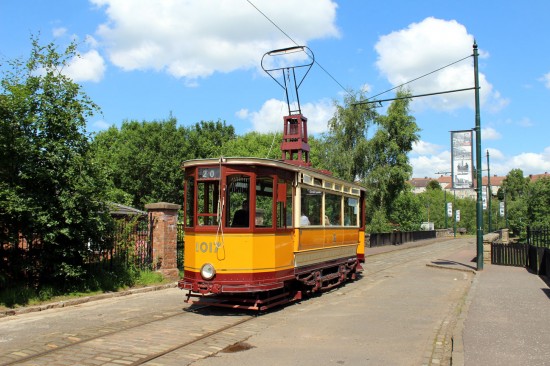 The only tramway featured in this article not to have a photo included so far this year was Summerlee but that is now recified as we show Glasgow 1017 in operation on 3rd July 2015. (Photograph by Gareth Prior)