We head to the Marton route of the Blackpool Tramway for today’s “Picture in Time” image with a couple of Marton VAMBACs passing on 27th October 1962 – the penultimate day of operation for this line.

Originally opening in 1901 the Marton route ran between Talbot Square and Central Station via Church Street, Devonshire Square, Whitegate Drive, Waterloo Road and Central Drive. The Marton VAMBACS were born out of the semi-open Sun Saloons built in 1939 by English Electric but which had progressively been upgraded over the years until finally in the early 1950s they were fitted with the revolutionary VAMBAC equipment and transferred for operation on the Marton route. They remained the mainstays of the route until 28th October 1962 when the last trams ran on this popular route. Of the 12 Marton VAMBACS two did not reach the final denouement – 10 and 14 – but the remaining 10 were to see use in the lead up to the final day with 11, 13, 15, 17 and 18 all used on this sad occasion. 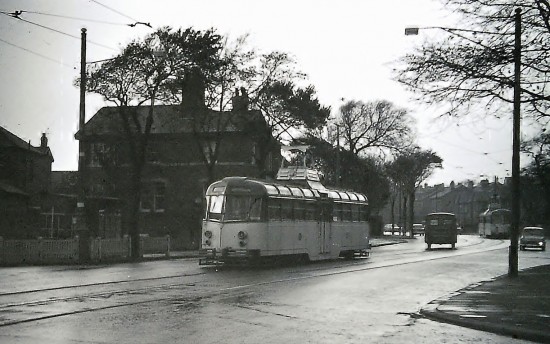