Posted on Thursday 9 July 2015 by Gareth Prior

Yes folks its time once again for our weekly look at just when and where you can enjoy a ride on a traditional tram in the British Isles over the next seven days or so. Again the next week doesn’t have any specific special events taking place but isn’t every day with a traditional tram running special anyway? If you haven’t got anything to do over the next seven days why not chose from one of the 12 tramways below and go and have a ride – you surely won’t regret it!

Current Status: Open every Saturday & Sunday except Saturday 11th July (closed due to the Race for Life taking place in the park). Trams run between 1200 and 1600. 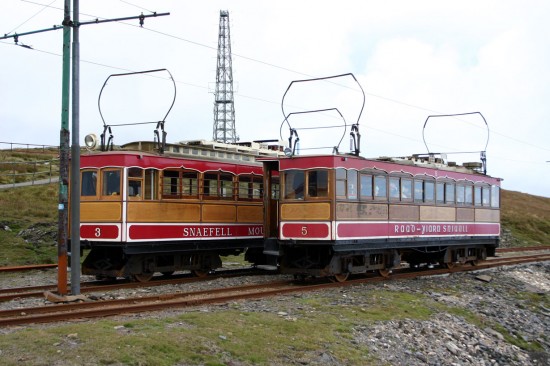 We are at the summit of Snaefell for this week's "Going for a ride" image as we find numbers 3 and 5 pausing on 12th August 2013. (Photograph by Gareth Prior)

1 Response to Going for a ride…