Posted on Tuesday 7 July 2015 by Gareth Prior

The 21st and final CAF built Urbos 3 tram for Midland Metro arrived under the usual secrecy on Tuesday 7th July at Wednesbury Depot. Number 37 arrived on the back of two low loaders having travelled from Spain by road and ferry some 21 months since the very first of the new order of trams arrived in the West Midlands.

37 arrived at the depot shortly after 0600 and the unloading process was soon commenced with the first half already on Midland Metro metals for the first time by 0940. Once both halves were off the lorries they were temporarily connected and moved into the workshops where initial commissioning work will be undertaken ahead of a start in testing and mileage accumulation.

However it may be a while before 37 is seen on the mainline as several of those trams already delivered to the West Midlands have yet to enter service with 17, 32, 34, 35 and 36 all still awaiting clearance to carry passengers. 17 – the first of the class to arrive in the UK back in October 2013 – is indeed a bit of a mystery as you would have expected this to have entered service by now but it still awaits this milestone in its life and there have been rumours it would be sent back to Spain although we wait to see whether these turn out to be true.

With 15 Urbos 3s now officially available for service the use of the original T69s continues to be a hit and miss affair with the remaining serviceable trams performing a bit of a hokey cokey in recent weeks. 10 and 16 definitely remain in service and do carry passengers on a fairly regular basis but since we last reported on the status of these trams there have been a few changes with 06 and 08. 06 was last seen running on 8th June (as shown in Gallery 539: Midland Metro – June 2015) when it returned to depot to be replaced by Urbos 3 31 and it is now understood to have been officially withdrawn. Meanwhile 08, which we previously reported as being withdrawn, did return to service for a few weeks at the end of June but again has not seen passengers since 30th June (unless any readers know differently?). Just how long the remaining T69s have left in them remains to be seen and once again our advice to anyone who wants to catch them is don’t wait too long as you may miss your chance (not that there is any guarantee you will actually see one on any specific day at the moment!) 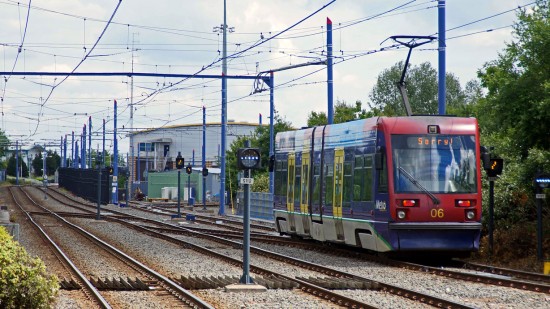 Is there the last time 06 will be seen on the mainline of Midland Metro? 8th June shortly after 1230 and it returns to depot to be replaced by an Urbos 3 and has not been used in service since. (Photograph by Andy Walters)