Posted on Tuesday 7 July 2015 by Gareth Prior

We’re off to Crich again for our latest installment in “Picture in Time” and this time we take a look at Newcastle 102 – another tram currently out of service. Today we see the tram in action in 1989.

A F class tram 102 was built in 1901 and was initially a single deck tram although was soon converted into the large open top double deck tram we see today. Withdrawn from service in 1949, 102 became a bit of a nomad and was stored at several locations before it found itself at the National Motor Museum in Beaulieu, Hampshire for approximately 10 years (where for a time it was joined by the more local Southampton 45). Moving back home to Newcastle the tram was given a full restoration and finally arrived at Crich in 1975 where it ran sporadically before it received further workshop attention ahead of a move to the Gateshead Garden Festival. But that’s another story. 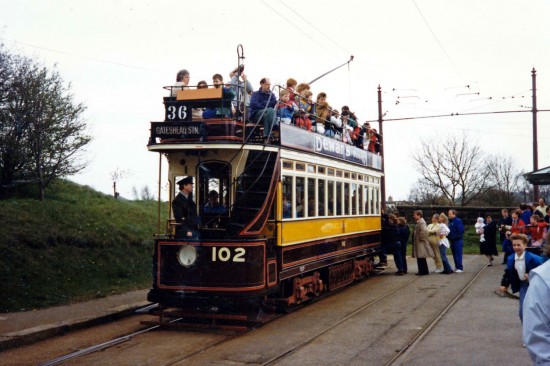