Plans to be revealed for new Seaton Terminus

Friday 8th May will give members of the public their first chance to see the plans for the new Seaton Tramway terminus with a public exhibition taking place at Seaton Town Hall between 1200 and 1600. The contemporary design is set to replace the Edwardian style ticket office built in 1996 and should be completed by spring 2016.

Since the current terminus was built in 1996 the area around the tramway has changed beyond all recognition with the old holiday camp being demolished and replaced with a Tesco superstore alongside housing whilst the Pay and Display car park is also undergoing a transformation currently with the construction of the Jurassic Coast Visitor Centre. The tramway has also increased in popularity which means the terminus has been outgrown and in inclement weather it isn’t always the most welcoming sight with limited cover.

Jenny Nunn, the Chief Executive of Seaton Tramway, said: “This is such an exciting phase of the Tramway’s long history in Seaton and is the culmination of many years of work with EDDC and the various stakeholders in developing the masterplan for Seaton in which the Tramway has played an integral part. Our new station will replace the existing Edwardian-style ticket office built in 1996, which we have somewhat outgrown as visitor numbers have increased in recent years, and see a new contemporary design focussing on the amazing heritage we have the privilege to be guardians for, which will also offer the visitor a fun and unique experience when exploring the tramway and area around us as well as open up all sorts of other tourism opportunities.”

The architects involved in the plans have extensive previous experience in cultural, heritage and tourist attractions creating designs for places such as the Snowdon Mountain Railway, The Gerald Durrell Visitor Centre Jersey, Prado Museum extension and the Mercedes Benz Experience.

The plans will be available for viewing at Seaton Town Hall on Friday 8th May between 1200 and 1600 and representatives from the Seaton Tramway and Ray Hole Architects will be answering questions throughout this period. Visitors to the exhibition will be able to “see the Tramway’s development over its 45 year history in Seaton and how the new station plans will complement Seaton Jurassic and the other development around it, whilst maintaining the integrity of its transport & railway heritage but also meeting the challenges of a 21st century tourist attraction.”

A planning application will be submitted shortly after the exhibition with an aim to start construction in November ahead of an official opening in Spring 2016. 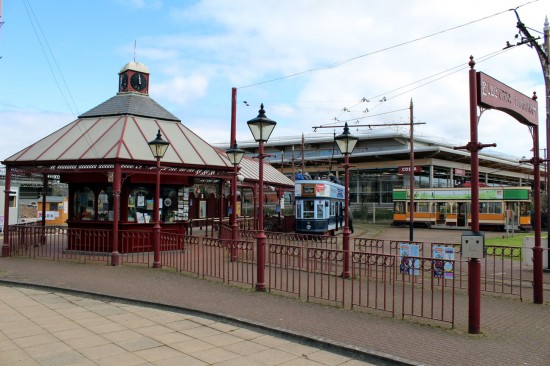 This time next year the Seaton Tramway terminus will look very different if plans due to be submitted shortly are approved. This view on 4th April shows the current terminus with 9 and 10 in situ. (Photograph by Gareth Prior)