Today our latest Picture in Time image goes back to Blackpool with a view of a tram which is no longer in existence – Marton VAMBAC 15.

15 was originally constructed as a Sun Saloon (semi open trams) entering service just as the Second World War began. It operated in its semi open form for less than 3 years and was then upgraded further in 1949. It was its next change, however, that was to be the most significant when on the first day of 1952 it entered service again having been fitted with VAMBAC equipment – the penultimate tram of the class to receive this – for use on the Marton route. 15 remained as part of the operational fleet in Blackpool until October 1962 when it was withdrawn from service with the closure of the Marton route. The tram itself did not last much longer than its route with scrapping taking place at Marton Depot in March 1963.

Our view of the tram shows it outside Marton Depot on 11th October 1961, a little over a year before the route would close. 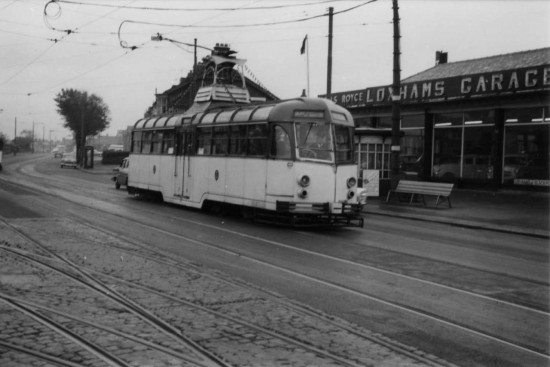 One Response to Picture in Time: Blackpool Marton Vambac 15