Posted on Saturday 2 May 2015 by Andrew Waddington

The May Day Bank Holiday weekend got off to a fantastic start in Blackpool on Saturday, with the return to service of Balloon 715 following workshop attention. The tram had last run on the tramway on 6th November 2011 on hire to the Fylde Tramway Society – and therefore it was highly appropriate that its return was marked with another tour for the same organisation.

715 had been one of many trams to fall on hard times after bowing out from passenger service on the upgrading of the tramway, ending up dumped in outside storage with bleak prospects for its future. However, the decision to merge the collections of Blackpool Transport and the Lancastrian Transport Trust happily resulted in an upturn in its fortunes, and it returned to the fold in December 2013. After a year of storage to dry out, it spent the past winter in the workshops undergoing various remedial work before being treated to a full repaint in the 1990s style green and cream livery, restoring this style to the operational tram fleet for the first time in a decade. The addition of black and white destination blinds as well as authentic Blackpool Transport and tramway logo stickers on the cab corners, as was the style of the time which 715 now represents, completes the look and the end result is truly stunning! Before any readers point it out, there are one or two minor inaccuracies but to have a traditional Balloon car back in service on its home tracks is undoubtedly an occasion to celebrate rather than criticise, especially when it looks so good!

The immaculate 715 is now set to operate on all three days of the Bank Holiday weekend, and should then become a regular sight on heritage tours during 2015. 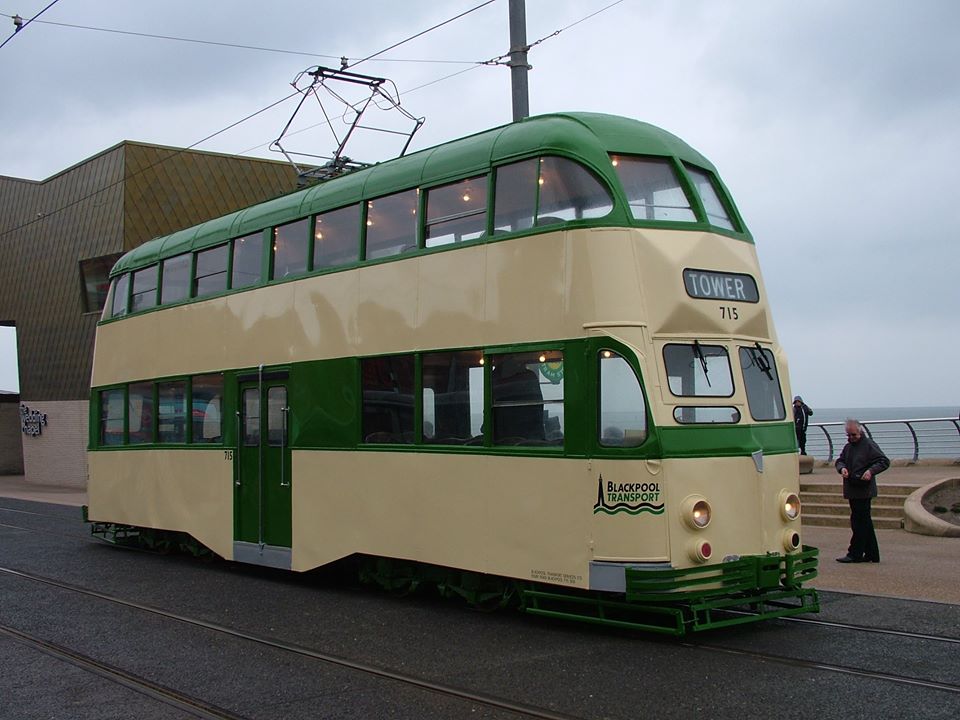 The immaculate Balloon 715 seen at North Pier just after arriving for its inaugural tour since being restored to active service in Blackpool. (Photo courtesy of Blackpool Heritage Tram Tours on Facebook)

One Response to Welcome back 715!