Details have been announced regarding plans for the operation of Blackpool’s heritage tram fleet during 2015 – and, as has been rumoured for some time, the level of service being planned is a vast improvement on that which ran in 2014. Not only will the historic trams be running far more regularly than has been the case at any time in the last two years, but also the number of trams operating on certain special dates will increase with as many as six cars due to run on some Bank Holidays!

A vastly different operating pattern to what has been seen before is being introduced for the heritage trams this year, which will see the trams running every weekend from late March until the end of the illuminations. Several different timetables are being promoted which will be used on various dates according to the likely level of demand, with extra cars due to appear on special event days such as Bank Holiday weekends and the ever-popular Totally Transport and Fleetwood Tram Sunday events.

The core schedule with the different timetables looks as follows:

The most common timetable is the BLUE service. This will involve two trams shuttling between North Pier and Pleasure Beach on a 20-minute frequency from 1000 to 1700. It is planned to use open Boat cars as much as possible in order to attract tourists, with enclosed cars being used in less clement weather. A very attractive £3 return fare should also help to encourage extra custom on this service, which is scheduled to operate every weekend between 28th March and 8th November (except when an enhanced service runs, and not on 5th September due to the illuminations switch-on event). This will increase to run daily between 30th March and 12th April, and also from 25th July until the end of August.

The next tier is the GREEN service which offers a 20 minute heritage tram service from 1000 to 1800 between Pleasure Beach and Little Bispham, utilising four different trams. This will effectively be similar to the service which ran in summer 2012 – but with twice as many trams to ride on! This will run on 3rd & 4th April, 2nd, 3rd & 23rd May, 20th June, 18th July, 29th August and finally on 26th & 27th September.

Best of all is the GOLD service which is basically an enhanced version of the green service described above, with six (or maybe more!) heritage trams running between Pleasure Beach and Little Bispham. These days will also offer four timetabled journeys to Fleetwood, departing from Pleasure Beach at 1000, 1200, 1400 and 1600. This mouthwatering package is due to be offered on 5th & 6th April, 4th, 24th & 25th May, 21st June, 19th July and 30th & 31st August.

There are also some more new innovations, including ‘Ride & Dine’ packages whilst ‘Santa Trams’ are also set to return on three consecutive Saturdays during December. The popular £10 heritage day tickets will be available on all other running days, which should offer excellent value for money for those who wish to spend a full day enjoying the delights of the historic tramcars in service.

Any critics of the Blackpool heritage service and the reduced number of days on which it ran last season should now be well and truly silenced, by a level of operation which appears to have exceeded the wildest hopes and expectations of all. In addition, it has already been confirmed that a special weekend of events to celebrate the tramway’s 130th anniversary will take place on September 26th & 27th. Other than the planned operation of the ‘Green Service’ as listed above, no details have been confirmed about what this will involve but it should be yet another great opportunity for tram enthusiasts to enjoy the mix of traditional and modern trams. Let us just hope that the service will be well supported to ensure that these classic tramcars are guaranteed a regular place on the promenade in this manner every summer! 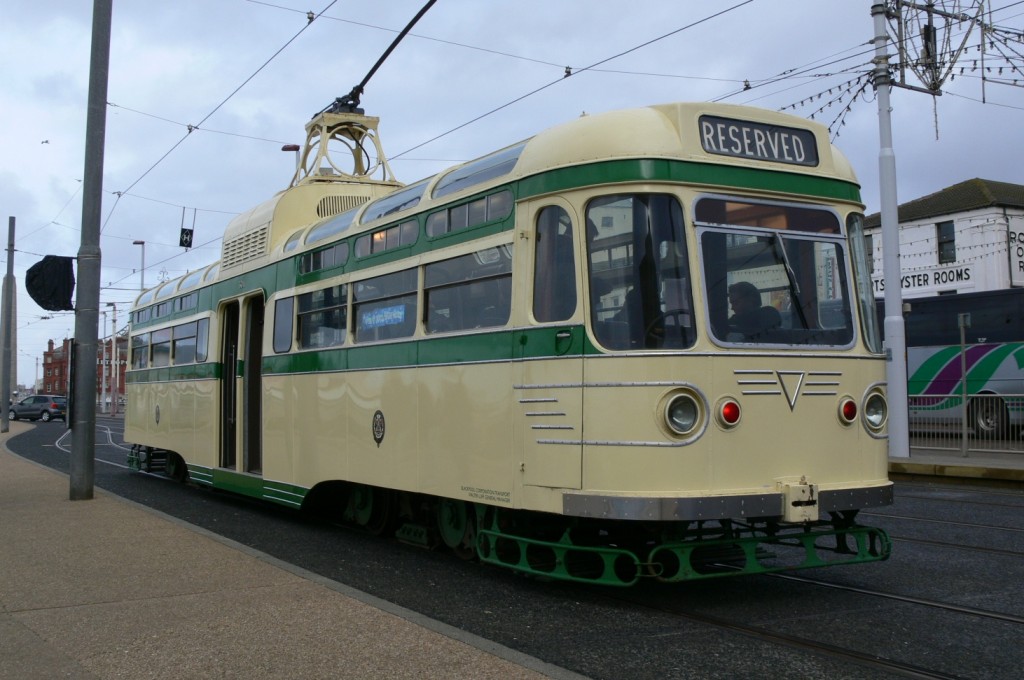 One of the wonderful trams which should be seen much more often than it has for many years in 2015 is Blackpool Coronation car 304. The tram is seen here at North Pier whilst engaged on private hire duty on 6th December 2014. (Photo by Andrew Waddington)

2 Responses to Blackpool heritage tours set for best year yet