Boat car sails to Glory Mine

Posted on Friday 25 May 2012 by Andrew Waddington

Another major milestone in the restoration of Blackpool Boat car 236 for operation at Crich Tramway Village, home of Britain’s National Tramway Museum, took place on Wednesday 23rd May when the tram ran all the way to Glory Mine on test for the first time since its arrival on site one month previous.

Glory Mine is not new territory for this tram though – it was last there in 1985, when it spent the season on loan to Crich in exchange for Blackpool ‘Standard’ 40 which was one of the star attractions at Blackpool’s tramway centenary celebrations that year. Back then the car was still numbered 607 and was painted in the rather bland 1970s livery with one-piece windscreens. Now it looks much more stylish in 1950s style green and cream livery and with full-length handrails restored in place of the modern driver’s windscreens.

This was 236‘s longest run since it last ran in passenger service in summer 2004, and according to workshop personnel the tram performed superbly on this test run. The car was also showing off its latest addition: chrome fleet numbers placed above its centre platform doors on the roof canopy. These have been generously provided by a member of the Lancastrian Transport Trust, who collected some old tram fleet numerals when he worked for Blackpool Corporation at the time when they were being removed from the trams and thrown away. As well as making 236 look even better, this adds further authenticity to this superb restoration, and has of course saved a bit of money in the process!

Further embellishments are now being added, including four corner poles from which light bulbs which hopefully be strung at some point in the future, similar to Blackpool Toastrack 166, also in the Crich running fleet. However this will not delay the car’s much anticipated public launch which is due to take place on Sunday 3rd June. British Trams Online hopes to bring you coverage of the launch ceremony and we can all look forward to being able to ride on this tram again after its eight year lay-off. 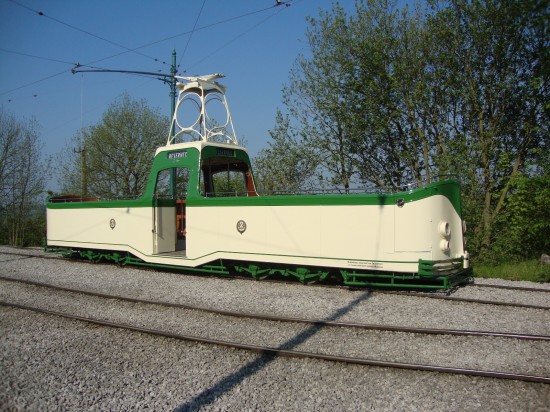 Blackpool 236 at Glory Mine on its first test run along the whole Crich tramway, on May 23rd. (Photo courtesey of the Crich Tramway Village blog and republished with permission)

3 Responses to Boat car sails to Glory Mine