Posted on Tuesday 21 October 2014 by Gareth Prior

On Wednesday 15th October the second of the once six strong class of T68A LRVs on Manchester Metrolink departed Trafford Depot for scrapping in Rotherham. 2005 was moved directly into the cutting area at Booths scrapyard and is now well underway to becoming just a piece of history.

2005 was delivered to Manchester on 28th September 1999 and became the last of the T68As to enter service when it first carried passengers on 7th January 2000. It had initially been used as a source of spares for its sisters which had originally delayed its entry into service. The LRV spent over a year out of service between September 2004 and October 2005 following a serious RTC which led to half of the vehicle being sent to Crewe for repairs. After giving just over 13 years (in effect only 12 years in actual use) of loyal service to Manchester Metrolink it was withdrawn from service on 9th May 2013 and was then transferred to Trafford Depot where it joined the scrapline. It has now followed sister vehicle 2004 into making the move across to Rotherham leaving just four of the T68As in Manchester.

Back at Trafford Depot 1017 is now in the workshops where it is undergoing final component removal before it too makes the trip across the Pennines for scrapping. 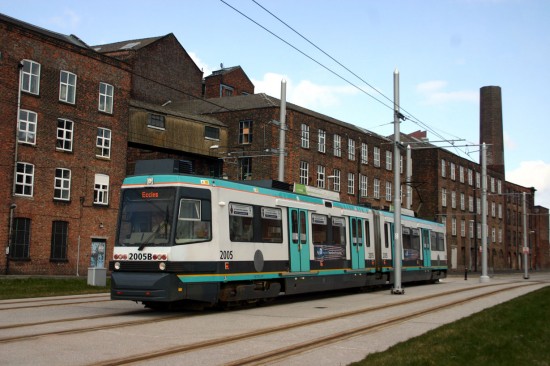 2005 pauses behind Piccadilly Station on 25th March 2013 whilst operating on the Eccles service. (Photo: Gareth Prior)