Posted on Saturday 11 October 2014 by Gareth Prior

The first LRV to operate in passenger service between Victoria and Bury on 6th April 1992 has become the latest T68 to depart Trafford Depot for scrapping in Rotherham. 1012 departed Manchester on Friday 10th October making that now very familiar trip across the Pennines to South Yorkshire and Booths scrapyard where it will not be broken up with just memories left of the vehicle to remember it by.

1012 was delivered to Manchester on 24th January 1992 and as mentioned above entered service on the very first day of passenger services working that first journey between Victoria and Bury (the corresponding first Bury-Victoria was in the hands of 1004 and 1008). It served Metrolink well until it was finally withdrawn from service on the last day of 2013 with a compressor failure (which ended the careers of many of the T68s of course).

The workshops at Trafford have now welcomed T68A 2005 which becomes only the second of this sub-class to be prepared for departure and this is likely to make the trip to Rotherham within the next few weeks.

Away from the sadness of the end of the T68/T68As the M5000s have increased in number recently both with vehicles actually in Manchester and also in service. 3089 arrived at Queens Road on Saturday 4th October and was soon in the workshops being prepared for commissioning and mileage accumulation which is now underway whilst the previous arrival, 3088, entered service on the very same day. As with all recent deliveries 3088 is restricted to routes where TMS in enabled and so will most likely be seen on the MediaCityUK shuttles and Eccles-Ashton service for now. 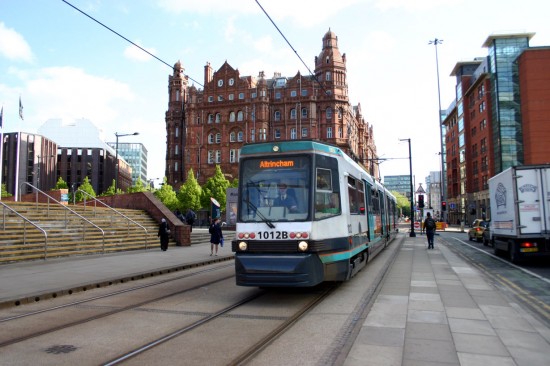 The latest T68 to make the one way trip to Rotherham for scrapping is 1012. It is seen here in happier times passing Manchester Central Convention Centre with a service to Altrincham on 3rd May 2011. (Photo: Gareth Prior)