In a pleasing development, anyone who fancies a ride on a horse tram at Crich Tramway Village this year won’t have to attend the Edwardian event, as Sheffield 15 will also be operating for a special Sheffield-themed event in May. However, and rather surprisingly, the decision has been made that it will only run on one day for the annual Edwardian Weekend, even though, as its name suggests, the event actually lasts for two days.

The 2014 Edwardian Weekend is being held on 12th and 13th July – but the horse tram, normally the main draw of this event, will only operate on the latter day. The event will however still feature early electric tramcars in service, mingling with other vintage vehicles and costumed re-enactors in the Tramway Street.

This is being compensated for by the decision to run Sheffield horse car 15 on three days in May as part of the museum’s ‘Best of Sheffield’ event, which runs over a whole week to celebrate the return to service of Sheffield 510 following a major overhaul. 15 is due to run on Saturday 17th, Sunday 18th and Wednesday 21st May in connection with this brand new event. Although this is a welcome development, perhaps it would have been wiser to restrict the use of the horse tram to the weekend only, as running it on a Wednesday in May (not even during school holidays) is unlikely to be as effective as the abandoned Saturday in July. The cost of hiring a horse to haul the tram will be considerable, so doing this on a weekday seems like a bit of a gamble.

No further mention has been made of any plans to run the museum’s latest arrival, Leeds 107, this season and it now seems increasingly likely that this tram will be confined to the Exhibition Hall during 2014 despite hopes that it would become the first choice of horse tram for operation at Crich. Hopefully the car can be approved for service at its new home once investigations into an incident at Middleton during its launch weekend are concluded, as it would be a great shame if it became a static exhibit after such huge efforts have been made by the Leeds Transport Historical Society to restore it to full running order.

Meanwhile in the Crich workshop, the process of dismantling the North Metropolitan horse car body which was retrieved from the Clay Cross store last year is continuing, revealing some interesting glimpses into its past life. This has included the uncovering of what is assumed to be its old fleet number on the outer bulkheads, 935 – which was previously unknown to all at the museum. Further paint scraping has revealed traces of its former livery, along with what appears to be a different number!

The derelict body of this tramcar is now being carefully taken apart, before being returned to Clay Cross to be stored in kit form in order to free up valuable space both at the off-site store and at the museum itself. As reported previously, there are no current plans to reconstruct this tram, although some components could potentially be re-used in any future horse tram restoration project. 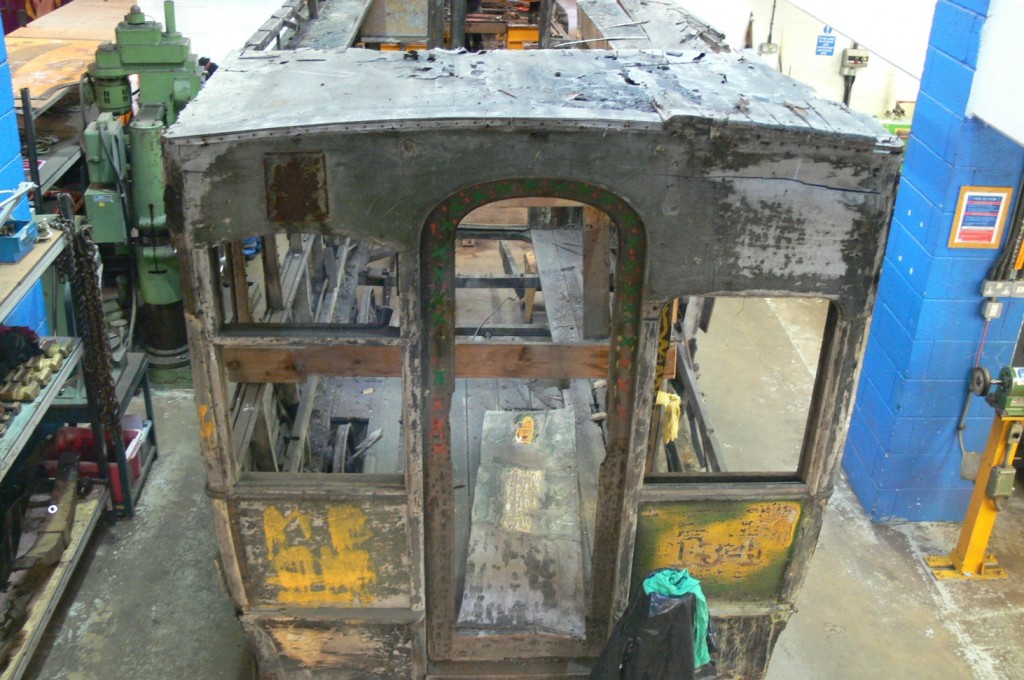 A close look at one end of the North Metropolitan horse tram body in the workshop at Crich, seen from the viewing gallery on 1st February. (Photo by Andrew Waddington)

3 Responses to Mixed fortunes for the Crich horse tram fleet