Sheffield 510 comes back to life

A major milestone in the extensive overhaul of Sheffield ‘Roberts’ car 510 at the National Tramway Museum, Crich, occured on Tuesday 18th February, when the tram emerged from the workshop under its own power for the first time since major work commenced on it some eighteen months ago. This brings the popular tramcar a step closer towards its return to passenger service, expected at a special event being held in May.

510 spent a number of years stored at the back of the depots with a number of minor ailments, before entering the works in 2012 for a major overhaul, funded by the Tramcar Sponsorship Organisation. By this time the upper deck side panels had deteriorated badly and these have been replaced where necessary, whilst the tram has also been treated to a full repaint in its unique ‘Last Tram’ livery, which it has worn since 1960. Other attention lavished upon the car during its time out of action has included re-wiring, replacement of the seating upholstery and a refurbishment of its truck. A few days ago the tram was shunted outside into the sunshine so that it could be positioned next to the workshop gantry, to allow some finishing touches to be made, and this enabled it to be driven out onto the depot fan on 18th February. This initial testing went well, although the stacked seat cushions inside the lower saloon were a clear indication that there is still some work to do before this tram can carry passengers again!

510 should be ready to be re-launched into service on May 17th as part of the Sheffield-themed event being held at the museum between 17th and 23rd May. This event is billed as a celebration of “all things Sheffield”, which should see Sheffield 74 join the much more modern 510 in service, with horse tramcar Sheffield 15 also due to operate on the Saturday, Sunday and Wednesday. In addition, the weekend will see visiting vehicles from the Yorkshire city join in with the fun, with particular emphasis on those from the 1950s, displays showcasing the city’s industrial heritage inside the Great Exhibition Hall, and the chance to sample various tasty treats hailing from Sheffield in the Red Lion and the sweet shop. 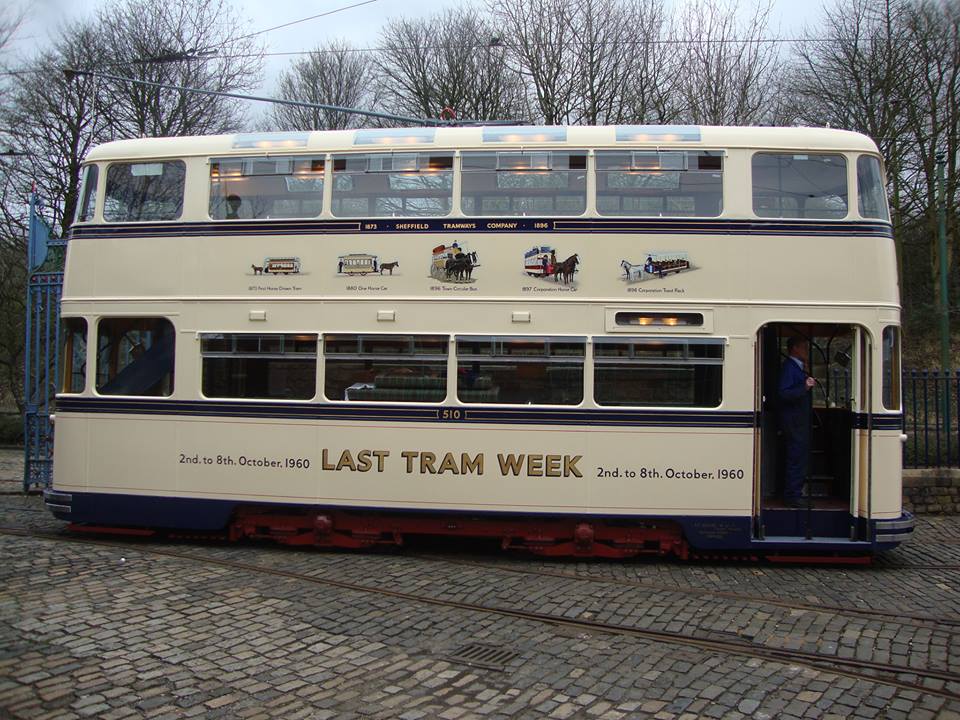 The beautiful paint job recently completed on Sheffield 510 in the Crich workshop is shown off to good effect in this shot of the car on the depot fan, during its first test runs on 18th February. (Photo courtesy of Crich Tramway Village)

2 Responses to Sheffield 510 comes back to life