Posted on Friday 14 February 2014 by Gareth Prior

The tenth tram to feature as part of our “Lost Trams” is Norwich 39 – a tram which was for a time on site at the East Anglia Transport Museum but which has since moved on to become a garden room/porch in Norfolk.

The tramway system in Norwich closed in 1935 and had a fleet of 40 open top trams with number 39 being one of the last of the original batch to be built by Brush Company of Loughborough in time for opening in 1900. A replacement body – manufactured by English Electric – was fitted to the tramcar in 1924 and it was in this state that the tram remained in until withdrawal at the closure of the tramway in 1935.

The body of 39 was sold off and it was moved to Heacham near Hunstanton in Norfolk before coming to the attention of the members of the newly formed East Anglia Transport Museum at Carlton Colville in the mid 1960s. The body was acquired after transportation across the border into Suffolk it became a temporary tea room for the members who were working on restoring the other trams which at that stage were on land at the rear of Hedley House adjacent to what has now become the Museum site.

39 made the move onto the main Museum site where it was adopted by members of the new East Suffolk Light Railway and was used to provide passenger accommodation at Woodside Station. Attention was turned towards the possibility of using the body as a passenger carrying vehicle and was mounted on a steel underframe carried on bogies but unfortunately due to a shortage of volunteers the work was never completed and the body remained in storage for several years. Eventually a request was received to acquire the tram body and it was subsequently removed from the Museum site and restored to form a garden room/porch on a cottage in the marshes near Acle in Norfolk.

That is not quite where the story ends though as when 39 initially went into the custodianship of the East Suffolk Light Railway a visitor reported that there was another Norwich tram body in the garden of a property in its home city. An inspection of this body led to the remarkable discovery that this was the original one carried by car 39! So this had been in place in this Norwich garden since removed from the bogies in 1924 and was in use as a garden shed in the 1970s and is believed to remain in situ today. 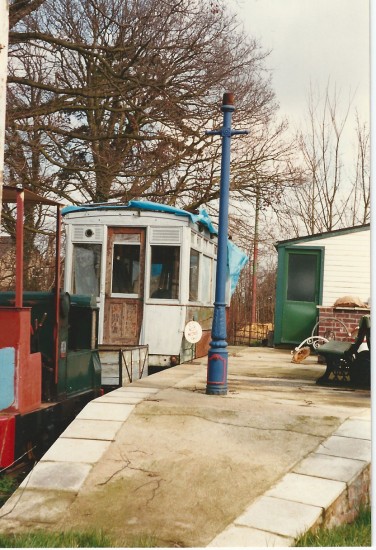