Sunderland 16 has become the latest member of the Beamish tram fleet to receive external advertisements for Binns, featuring the famous ‘Shop at Binns’ slogan on the upper deck end panels. This famous advertisement was once carried by the entire Sunderland tram fleet, and so its application to preserved car 16 is highly appropriate.

The familiar advertising slogan has been carefully hand-painted on each end of Sunderland 16, with a plain white background used to create a very striking advertisement which will ensure that this tram looks very different when it returns to service. Some further remedial work on the car’s external paintwork is also taking place, including attention to the fleet numbers and lining out, whilst revised between-deck adverts are also being added to the body sides. When it was restored to service, this tram was never properly varnished which has resulted in a rather dull appearance to its attractive maroon and cream livery, although a fresh coat of varnish should brighten it up considerably.

Sunderland 16 duly becomes the fifth different tram to operate at Beamish Museum carrying Binns adverts, following on from Gateshead 10 (prior to repainting in Grimsby & Immingham green livery), Sheffield 264 (when initially outshopped as an open topper in Gateshead colours, before reconstruction of its top deck), Blackpool 703/Sunderland 101, and most recently Oporto 196 following its latest repaint in South Shields blue and yellow livery. The tram’s wheelsets are currently being worked on at Blackpool, but hopefully 16 will soon be back in service following a fairly long absence so that its amended appearance can be fully admired and appreciated. 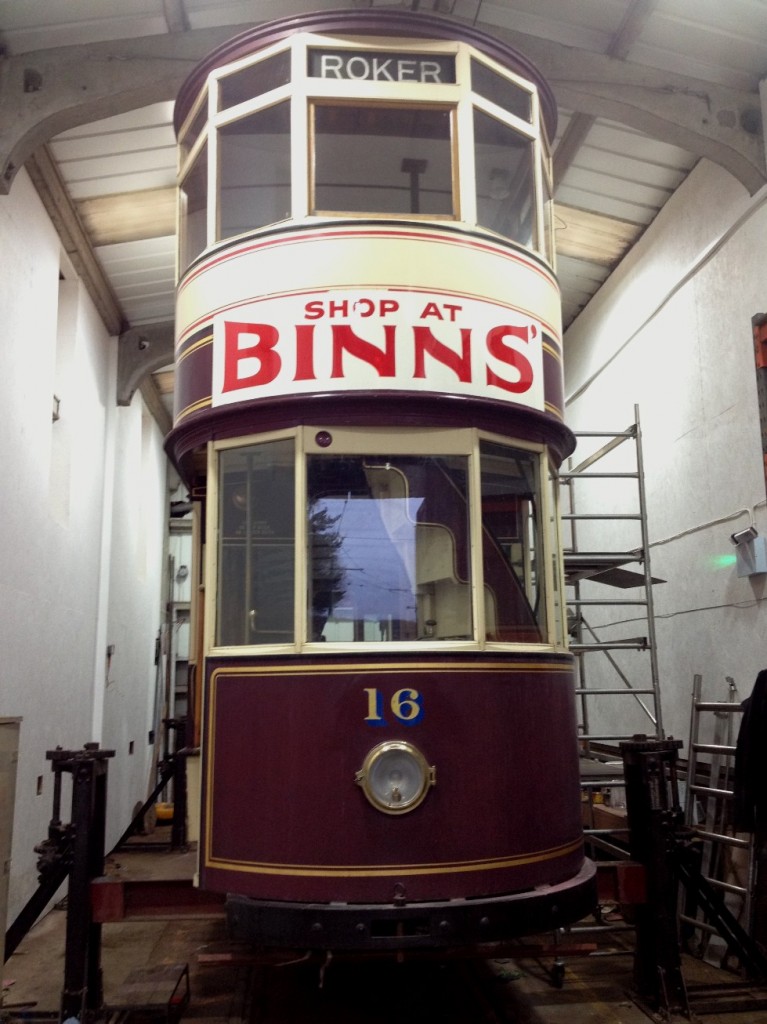 A sneak preview of Sunderland 16's newly painted adverts, seen in the tram depot at Beamish where the tram is residing whilst its truck is under attention. (Photo courtesy of the Beamish Transport & Industry Blog)

5 Responses to Sunderland 16 gets ‘Binned’