The long-awaited commencement of passenger services on the upgraded Blackpool tramway occured on Wednesday 4th April 2012, with Flexity 006 becoming the first of the new low-floor trams to run in ordinary passenger service. The car was allocated to Route ‘A’, the first departure of the day which is timed to set off from Starr Gate at 5:00am. This was a very historic occasion for many different reasons, but sadly an incident in Fleetwood spoilt the occasion and resulted in some unwanted negative press for the tramway on what should have been a fantastic day.

On arrival at Fleetwood Ferry, 006 experienced some problems with the wheels struggling to make contact with the rails. Due to severe weather conditions overnight, a large amount of sand had blown onto the track and when attempting to depart from Bold Street and turn towards the former boarding stop, 006‘s front axle left the rails. All passengers were duly transferred onto a tram replacement bus, and following trams were forced to terminate at Fisherman’s Walk in scenes remiscent of the 2010 season, when this site became the temporary northern terminus whilst the upgrade work was in progress. The breakdown crew soon arrived on the scene and 006 was rerailed and mobile again by about 9:00am – the process of rerailing the tram not helped by strong winds, and the fact that engineering staff are not yet used to dealing with derailments involving articulated trams! The car was then driven ‘bang line’ back to Fisherman’s Walk, where it used the crossover to return south on the correct line and head back to the depot.

Although a derailment was obviously a terrible way to start the Blackpool tramway’s new era, the incident is genuinely thought to have been nothing more than very bad luck. Ever since the tramway opened in 1885, sand blowing onto the tracks have caused no end of problems for the trams; 006 is not the first victim of being derailed by drifting sand, and is unlikely to be the last either. However, at a time when Blackpool Transport’s every move is being closely observed by the new-look tramway’s many critics, this was the last thing that the company needed, and to make matters worse, the BBC were soon on the scene with the derailment being reported on the local news bulletins, and on the BBC website.

Once 006 had been moved out of the way and the remaining sand was cleared from the tracks, a tram service to and from Fleetwood Ferry finally commenced with car 011 being the first succesful southbound departure from Fleetwood after 10:30am. Although there were some further issues – such as the all-too familiar short workings caused by late running and a few faults with the new trams’ bells – the first day appeared largely succesful apart from that first high-profile incident. Passenger loads on the trams looked healthy and it must be hoped that these people will continue to use the tramway as a form of transport once the novelty of the new vehicles has worn off.

On a brighter note, this day was of course a historically important one for a whole host of different reasons. As well as marking the first use of Flexity2 trams in public service, this was the first time that a full tram service between Starr Gate and Fleetwood Ferry was on offer to the travelling public since September 2009, when the Starr Gate to Pleasure Beach section was closed for track renewal work to start. 006‘s early morning journey was the first service run north of Little Bispham since November 2010, and the first north of Fisherman’s Walk since November 2009. It also marked the welcome return of early morning tram journeys which have been greatly missed in the last few years. For the record, the other trams used in service on this day were: 001, 004, 007, 008, 009 and 011, the latter replacing 006 after its first trip. Cars 002 and 010 were also being used for driver training purposes. All of these trams have now been fully branded with the final livery details, except for 009.

Here at British Trams Online, we are of course passionate about the traditional Blackpool tram fleet, but at the same time we are welcoming of the new era for this much-loved system. We hope that things quickly settle down, and that the new trams and modernised tramway will prove to be a success. Whilst some of the system’s unique character may have been lost, Blackpool will now be the only place in the UK where we can ride on both traditional and light rail trams, and we intend to enjoy what is on offer this year. Look out for extensive coverage of the Easter weekend in the town on this website, which will of course feature the return to service of some of the retained vintage cars from Good Friday onwards. The future has arrived, even if it struggled to stay on the tracks at first! 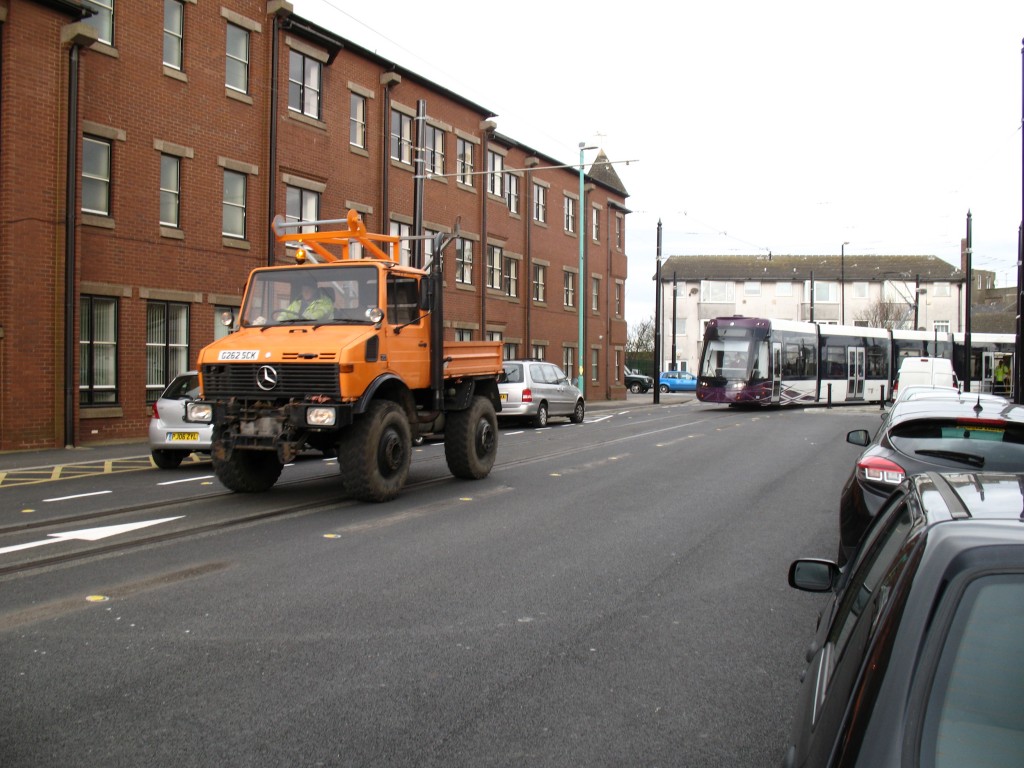 After derailing on Bold Street corner, 006 is seen gingerly following the Unimog on the wrong line through Fleetwood. (Photo by Mervyn Williams) 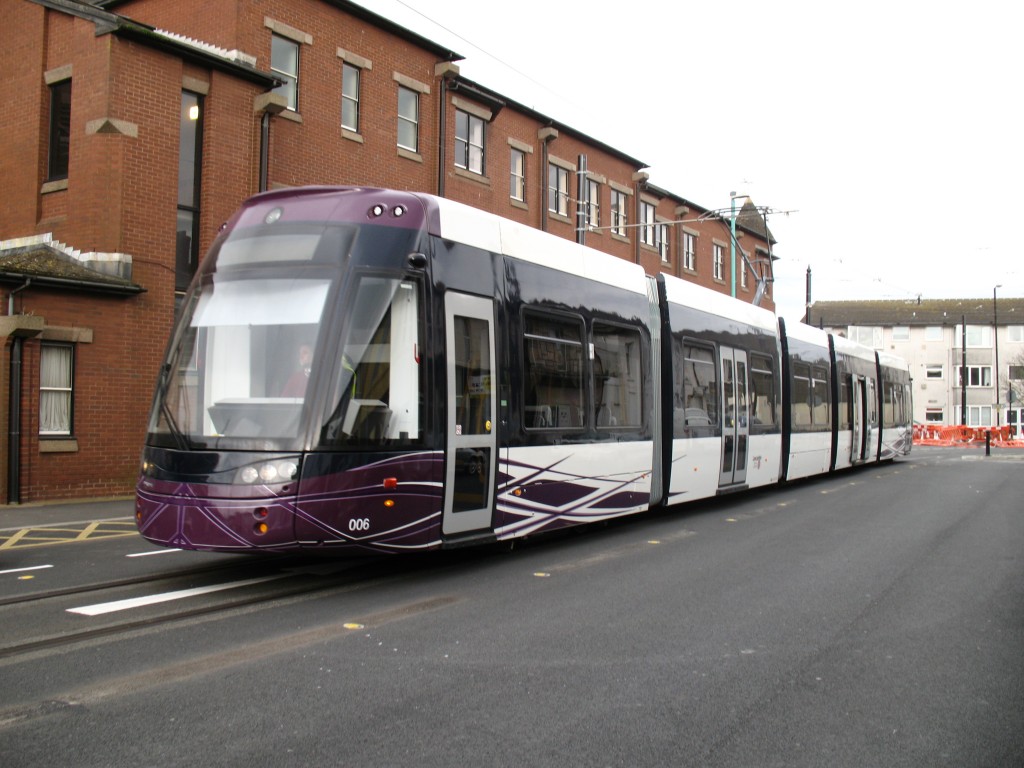 006 in all its glory heads through the streets of Fleetwood on its way back to depot following its ill-fated first passenger journey. (Photo by Mervyn Williams) 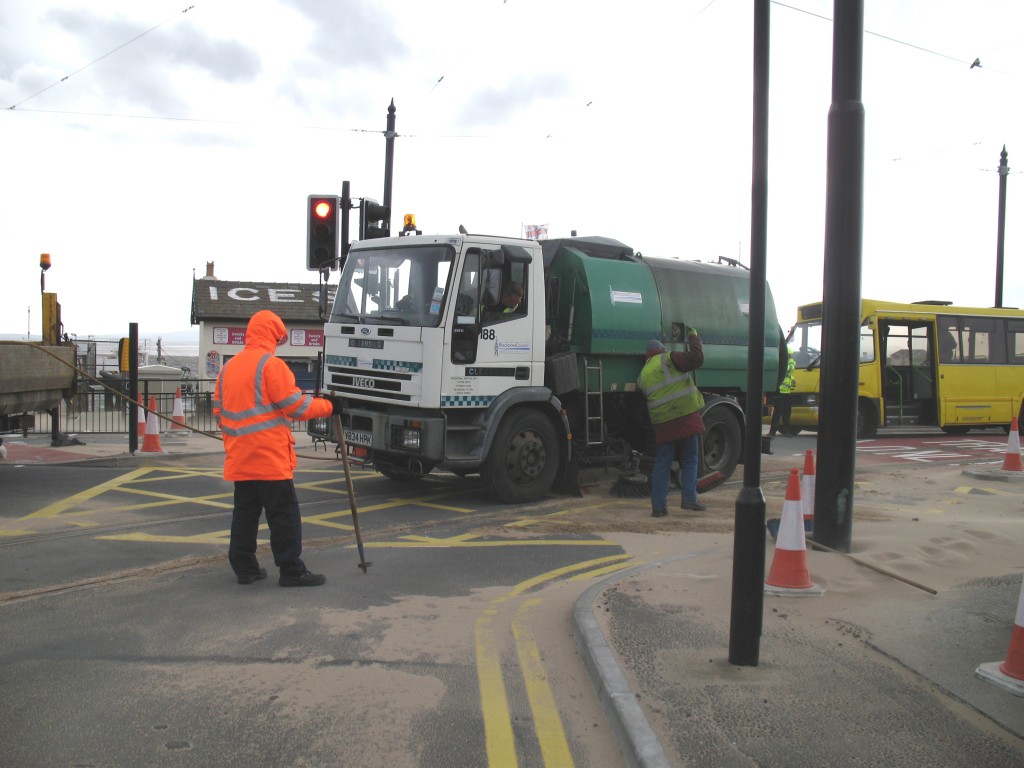 Workmen are seen clearing windblown sand off the rails prior to the resumption of the through tram service to Fleetwood Ferry. (Photo by Mervyn Williams)